Bazzoid by Maxx Claster is a Virtual Instrument Audio Plugin. It functions as a VST Plugin. 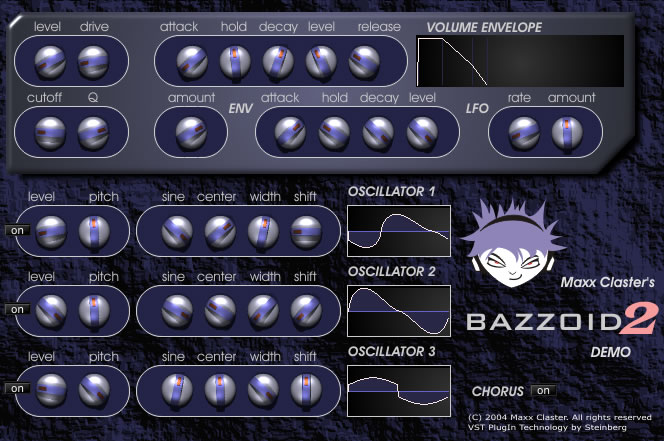 I have not heard much about this almost free ($20) vst on the board so I thought I would bring it to peoples attention; especially as it acquits itself so well.

For a start I would like to say how responsive the developer is to feedback - I made 2 suggestions and they have been implemented in the latest version - a couple of months after I had E-mailed Maxx (the developer) with them.

Basically what we have is a 3 osc synth with a volume envelope, filter with envelope and an lfo - quite basic but with the flexibility to go somewhat further than one might initially expect.

Although it would be fair to say that this is not a modulation freeks day out it does allow enough filter and lfo carnage to produce some quite non bass like timbres and talking about bass this synth has the ability to produce some of the deepest, roughest and gut churning sub basses I have heard - in either hardware or software to date - I don't say this lightly - I have been using ver1 for some months now and my genres are Reggae/Drum and Bass which relies on precisely those types of low frequencies and Bazzoid does not short change you in this department - in fact with tweaking and liberal use of the filter/q and drive control I would say we are in undiscovered sonic territory here!

Now things are starting to get interesting - Oscillators, not your usual sine and sawtooth but a set of controls that allow you to manipulate the waveform into a variety of shapes - I don't know the technical term but what we have are four controls per Osc - Sine, Center, Width and Shift along with a visual graph rendered in real time; which allows you to create a whole variety of different base tones - there is also a level, pitch and on/off control for each Osc.

There is a very basic chorus effect which is preset and can only be turned on or off - but it does give a nice subtle enhancement.

Bazzoid comes with 128 presets which cover a lot of ground - but for me the real joy (not being very up on synthesis I must say) is simply fiddling around with the beast - because the synth is not overly complex it really does have a very approachable interface and I have made a fair amount of presets since purchasing it.

The GUI takes up about a third of the screen which is fair considering that the interface is nicely spread out and the controls are nice and responsive.

So there you have it - there is a demo available and I would recommend people give it a try, I think this product will grow over time given enough support.

I have modified this review slightly due to an updated version which has various enhancements.