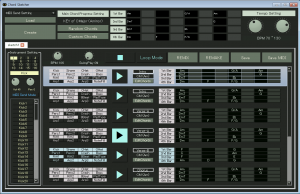 Chord Sketcher is Algorithmic composition.
Anyone can make song easier. All instruments are selected randomly. And all notes are created by random algorithm specially designed. So even if same tempo, same chord progression, it is not possible to make same songs. If you make song by chord sketcher, your song is sometimes good and sometimes bad. If you're lucky, you can have creative song.

Can select key you want. Chords will be modulated automatically, every time you change your song key.

There are many patterns in Chord Sketcher. You can construct freely your song by Duplicate, Delete, and DragMove.

You can make easy chord progression by drag and drop.

Easy adjust volume and pan each track. You can have balanced sound.

Can export MIDI file and cheannel select. So you can works your file professional on DAW (Cubase, Ableton Live, Logic Pro, FL Studio, Studio One, etc.).

There are 16 instrument tracks. Can adjust on/off you want instrument by patterns. So you can make more complex patterns. And can change instrument in each track.

Average user rating of 2.00 from 2 reviews
Read all reviews Add A Review
Report

This thing is not really a joke but more a toy for children. Usefull for elevator music at the most, but most common for Atari retro music games lovers. I would say "hopefully" because I don't know if I wouldn't be terrified if one day a software would make me a pure Radiohead's song in just one click :)

Maybe as intro: definitely nothing for the people who principally hate that kind ("machine composition") of stuff.

It is really kind of an exotic beginning of a software development even for someone who nearly tried all of the available stuff in that corner in the last ten years.

What really makes it kind of hard to rate is that the great ideas you can imagine behind the software are implemented I would say less then 10 %.

So there is the great concept, the easiness of general use, musically not bad results on the pro.

And then the list of features begins which are in the actual state (I think other devloppers would not even have calle it alpha-state....):

- Of course no individual editor for the patterns/tracks/song.

- Not even the possibility to make lets say ten different compositions and copy the best patterns from all the compositions in one track.

- So the only thing left is to copy some patterns and turn some tracks on or off.

Useless to go deeper in detail cause without even some basic editing functions in the current state it is only good for one thing: take what it composes as a whole and so more or less as a yoke for kids. But that for me is not a "Sketch" application without any useable editin functions.

I have bought it for the intro price, hard to say if it worth it (compard to the competitors definitely NOT worth the regular price), I am really hoping that they will work on it and at least ad some rudimentary editing functions (evrything more of course more then welcome). And in my wildest dreams it COULD become a very good and still easy to use application for real song sketching but thats (at the moment) lightyears away.

I am a little disappointed cause the developpers in the past stand for solid work and not some alphas thrown in the market but lets see what time might bring.

So as conclusion: actual more a 3-4 on the scale but with potential to reach the 10.

Just to mention what could be added (that mean not the now obvious missing functions for working as it should but really new addons): melody track (o.k., I know it is called CHORD sketcher :-))), velocity on the tracks....

For european customers (as mentioned in the forum before): really annoying that the payment just dont fit, they change dollar to euro 1 to 1 and then add VAT, so you pay more euros then dollars in the end (no answer from the support to this remark from me send last week...).

Still no support and no answer to questions, but 1.0.3 update definitely a win, now possibility to edit single instruments/rhythms, thats definitely a lot more fun. So changing the ratin to 6, maybe if further updates improve in same way then from 1.0 to 1.0.3......