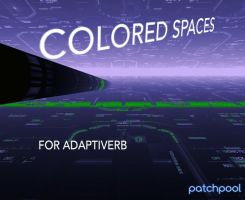 Colored Spaces for Zynaptiq Adaptiverb was updated in February 2017 and now contains 201 creative patches (including 11 variations), many of them making use of the unique spectral filtering feature implemented into the plug-in. Dozens of sonic footprints from acoustic, vocal and electronic sources were captured and tested on various input sources, creating a diverse collection of spaces suitable for ambient/cinematic/experimental music and sound design. Some tonal spaces using the pitch quantization and resonance feature and some more conventional reverb patches for general usage and drums/percussion are also included in this collection.

The Freeze-function in Adaptiverb can create very interesting drones and pad sounds, so Colored Spaces also contain 50 presets with frozen ambiences, pads, drones and otherworldly textures which can be used as a starting point for sound design and/or as an inspirational source for new musical excursions. All patches are programmed 100% wet to be used on an effect bus.

You can view/download the PDF for Colored Spaces with more details, the licence agreement and a patch list here.

All demos below were produced using only effects provided by the patches from Colored Spaces.

All videos for Colored Spaces can be found in this YouTube playlist.