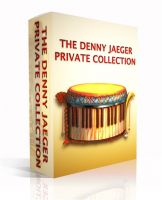 Denny Jaeger has developed revolutionary techniques that can turn almost anything into a power instrument. For instance, he saw an unthinkable potential in a lampshade. The possibility of an entirely new instrument. Proprietary methods that Denny developed allows him to go into a basically unusable sound and reconstruct it. Using these methods, the sound is broken down into different components. The components are then reconstructed individually to create entirely new sounds.