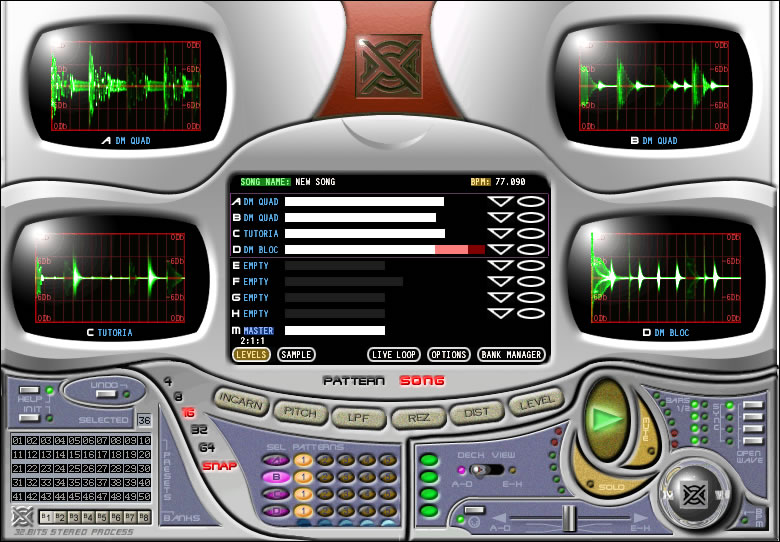 On first impressions it appears to be another loop chopper (think Recycle), allowing you to slice up, re-order and 're-groove' your sample collection.

However, look deeper, and you will also find 8 tracks in which to load loops and which can store up to 5 variations on each loop. These can be played/muted/crossfaded and loops within these tracks can be manipulated in real-time. So its a Live 8 track mixer too, with DJ type functions.

'Live Loops' are another method of playing back loops, more akin to a traditional sampler. These Live Loops are triggered via midi (or a PC keyboard for the growing army of laptop performers) and have all the usual pan, level and trigger settings.They can be organised into mute groups, where they can interact with the 8 tracks described above, and they can be generally mangled further by some innovative 'Live Tools' which are also triggered via midi and affect Live Loops in real-time.

So its really a kind of performance based remix tool. Feed it some loops and it will spit back seemingly endless variations. Then rack em up and play them like an instrument.

What sets Diving Machine apart from any other loop based product, for me, is the speed at which you can do certain processes.

Let's take an example... I have a 2 bar drum loop. I can load it in and within 10 seconds it will be sliced and a shuffle groove applied. This includes the manual fine tweaking of EVERY SLICE POINT (think about this.... in other slicing software this can take an annoyingly long time).

Another example... I have 2 drum loops, both very different. I would like them all to play the same drum pattern (k-hh-hh-sn-hh-k-hh-sn). Each loop must be sliced first (10 seconds each remember), after that it is a one click operation. Imagine..... I can have the sounds of the Loop A to be playing the pattern of Loop B in one click. I don't know of any other software that has managed to automate this normally fiddly operation. ((tm) this now Devine-Machine crew!!!)

Devine Machine is clearly a labour of love, and I know for a fact that the author regularly uses it on stage. (notice I give it 10/10 for stability - not a single crash). Its clearly been designed as a live tool, but I've found it to be a complete star in the studio aswell. There is no way I can cover the breadth of features in 3000 words, so I urge you to spend a little time with it and see what it can do for you. So fond of it have I become, that I am now writing songs just using DM. For me DM is a liberating product. It saves a great deal of time when doing the boring tedious work of chopping loops, but also offers a great suite of tools allowing you to perform live and sequence.

It does have a slightly candy-sweet GUI. Some mouse click assignments seem confusing and it is generally an unconventional piece of software..... To some people, it will make no sense.....

To the rest of us however..... its divine!.Read Review

AS I examining my tools, only 2 can be not compatible with 64-bit:

One of them is Devine Machine pro.

Somebody use it on Windows 7 64-bit or higher Windows?