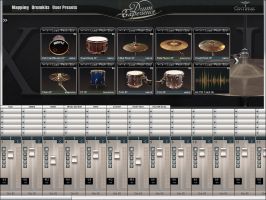 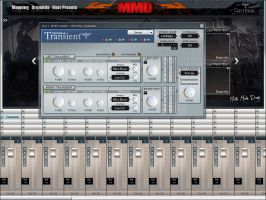 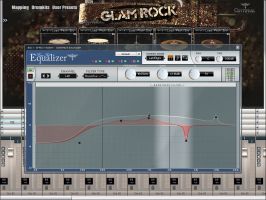 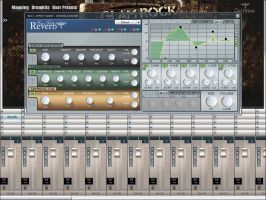 Drum Experience is a drum sampler constructed to offer all possibilities to create, to process and change drum sounds in dramatic ways with sustained professional sound quality. We want to give the user the same results as if they had access to the equipment and rooms of a high-end drum studio.

We are constantly working on expanding our library of presets made by users and invited drum engineers because we realize that tweaking every detail is not for everyone. The presets give you access to the same mixer setups and sounds as the professionals.

To tune and process the sound with total freedom and quality, a whole new type of sample engine had to be constructed. 127 velocity layers with round robins, up to 16 individually controllable microphones, insert effects of absolute top quality, an internal routing system without boundaries, an advanced sample selection/processing algorithm to guarantee the dynamics and realism. Drum Experience also has the ability to load custom samples (any WAVE-file) side-by-side with the full-fledged drums.

Insert effects are a vital part of drum production and therefore Drum Experience has integrated versions of Centipeak's in-house state-of-the-art Bona Fide Effects Series which consists of Bona Fide Reverb, Bona Fide Compressor and Bona Fide Equalizer. To have effects of this quality available inside the drum sampler gives almost infinite possibilities to create professional sounds without using a single external effect. The effect arsenal also contains an event-based Transient Shaper for changing the attack and sustain characteristics of the drums. The Transient Shaper has the first-of-its-kind TransEQ which applies an equalization profile to either the attack or sustain or both.

All basic facilities of a drum sampler are included in Drum Experience. The pitch has a novel feature, Preserve Attack, for keeping the original punch of the drum while still pitching the tone and sustain of the sound. The envelope control has up to 24-points which can reshape the sound with great precision. Each microphone, articulation and MIDI-event type combination has its own envelope. The Volume-curve can boost/cut the volume of a sample based on its velocity, which allows boosting of the quietest ghost hits in the mix or reduce the volume of the highest hits for example.

By using the custom samples-technology your current sample libraries can be imported into Drum Experience. Enhance and reshape them with the pitch, envelope, insert effects and most other features of the drums.

Drum Experience's core engine is capable of playing hundreds of samples at the same time, perform the processing of the insert effects, apply pitch and envelope to the sound and route the audio without restrictions on a personal computer or laptop without the need for extra hardware.

Centipeak's website features a Preset Exchange-site where users, and from time to time guest producers especially invited, can share their presets and sounds with each other. The vision is a large ever growing collection of presets to be used totally free of charge.