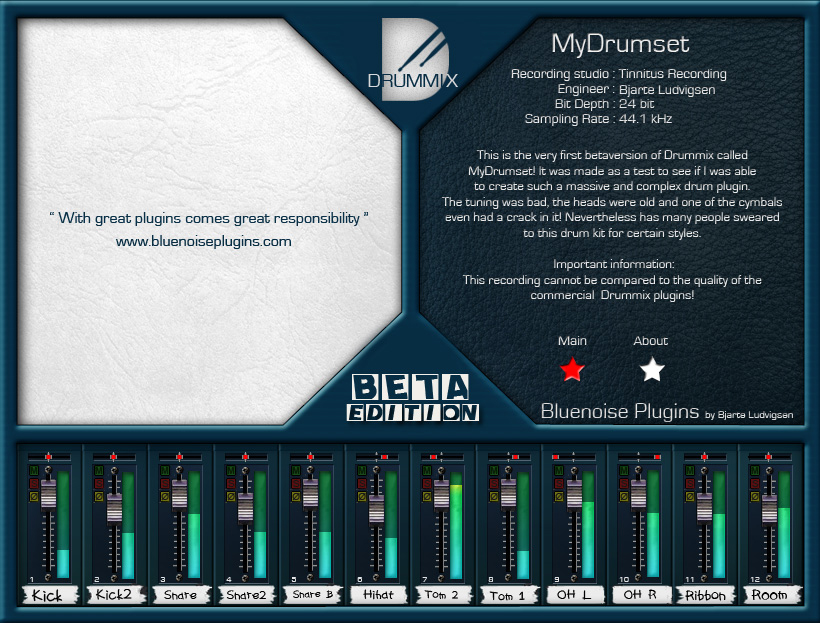 MyDrumset was made as a test to see if I could make such a complex drum plugin. The recording of the drums was done very quickly with only me on everything from drumming to engineering. As you can imagine that is not a perfect way to record a drum kit and if you add the fact that the drums weren't tuned, one of the cymbals had a crack in it, the heads were old and I did everything in about 2 hours, it's nothing even close to the sound of the Drummix line of plugins. Still, I released it as a public beta just for fun and the response has been marvelous. Not only did this plugin beat two of the well-known brands in an anonymous poll, but it also got raving user reviews and was even reviewed in Sound on Sound.

The beta version had 3 presets: Rock, Rock Olympic and 70's. The drums on all presets are a Ludwig Fab Four but on the Olympic version I used an old Olympic snare drum. The 70's preset was the same drum kit with a blanket over the toms and snare. The sound of these recordings has been used by thousands of musicians / engineers and has for many a sought after "indie" sound.

I have decided to release the old beta version without all limitations it had and a new set of features that consisted only in the commercial plugins:

This plugin is only recorded with 1 to 4 different velocity layers for each sound.

The plugin has outputs for every microphone recorded so you can mix the drums like a real drum kit. The plugins was created because I felt the acoustic drum plugins available on the market all sounded very polished and premixed. This is not the case with the Drummix product line or MyDrumset. The drum kit was recorded with excellent microphones from brands such as Neumann, AKG, Coles, Beyerdynamic, Shure and many more.

The plugin comes both in stereo for a quick setup and in a multiple output version. In the multiple output version all the different microphones are sent out to 12 different physical outputs in your DAW. This way you can mix the drums just like a real recorded drum kit. Add EQ, compression and reverb to taste. Go for hi-fi or low-fi sound or even remove some of the microphones to make it sound completely different. We believe the effects you have in your DAW are much better than the ones inside a drum plugin.

Well, MyDrumset sounds different. It's not super hi-fi and cannot be compared to the other Drummix plugins. Still I believe that you will find Drummix Mydrumset sonically very nice. Please check out the drum kit in the player to the right.

This beta version was actually reviewed in Sound on Sound. Read for yourself.

Drummix MyDrumset is free for everybody. The download will say trial or demo, but it is a fully working product.

These plugins are set up as a GM drum kit and will work with e-drums. However, they are not specifically adapted for that purpose, therefore we recommend trying the demo before the purchase to see if our product meets your needs. If it doesn't, we can recommend Toontrack's EZdrummer, which is a nice plugin that works very well with E-drums.

To be able to use the plugin you need a sequencer that supports VST instruments and multiple outputs such as Nuendo, Cubase, Cakewalk, Sonar, Reaper, Samplitude, Studio One etc. Please note that this is a Windows plugin and will not work on Linux Ubuntu or Mac OS X. Important notice regarding Presonus Studio One 2: there's issues with this particular new DAW that we are trying to fix. Studio One seems to work just fine:-)