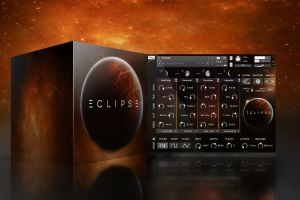 At the heart of Eclipse is its intuitive interface and its Triple Engine Design originally found in Orbit - Pulse creates modern tonal pulses, Chop for an electronic/stuttered style, and Flow for stunning pads and textures. Combined with the ability to morph between these modes freely, the result is an endless array of inspiring musical possibilities.

With custom sounds developed by a world-class team of programmers and sound designers, and an effects path tailored especially for massive sound, Wide Blue Sound has developed its most powerful instrument to create rhythmic intensity, dark cinematic atmospheres, and energetic drive.

To experience the sound of Eclipse, visit the website at www.WideBlueSound.com.

"ECLIPSE really goes to that dark place. And has a depth that is rarely seen and much appreciated." - Harry Gregson-Williams, composer of Academy Award-winning film The Martian.