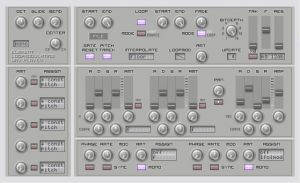 element by xoxos is a Virtual Instrument Audio Plugin for Windows. It functions as a VST Plugin.
Product
Version
1.0
Tags
Tags:Loop Modulating WAV PlayerelementSamplerxoxos
Instrument
Formats
Sample Formats
Loads and/or Saves
WAV
Copy Protection
None
Open Source
Other / Unknown
Important Note
Due to this item being developed alongside open source resources, the WAV loading code is not robust. While it opens all the samples in my personal collection it is not guaranteed to load every sample in existence, given the diversity of formats that have been labeled as WAV files.
My KVR - Groups, Versions, & More
16 KVR members have added element to 4 My KVR groups 16 times.
Not In Your MY KVR Groups
(or group limitation prevents versioning)
9 0 Favorites
4 0 I Own This
2 0 I Want This
+1 in private groups

Element VST is a loop modulating WAV player (sometimes known as a "sampler") which loads a single 8, 16 or 24-bit wav.

What this feature set translates to.:

Element VST was developed with a series of open source WAV player modules created for SynthEdit, so that this item can be considered partially open source (e.g. the LFO modules have not been released at this time).