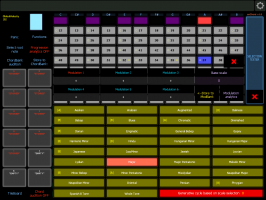 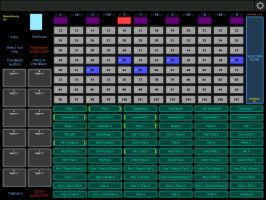 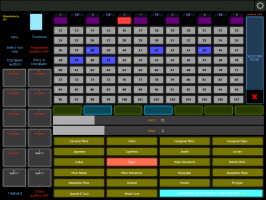 enChord by Avantgarde Sound is a Mobile Audio App and a Standalone Application and Soundware (samples or presets that load into other products) for iOS. It functions as a Standalone Application.
Product
Version
1.2
System Requirements
iPad only, MIDI connectivity via wireless or dedicated iOS interface (such as IK's iRig MIDI, etc.) or class-compliant MIDI interface via Camera Connection Kit
Tags
Tags:MIDI ControllerAvantgarde SoundChordsComposition ToolenChordHarmonizerHarmony DesignNotesSoftware MIDI controllerUtility
Soundware
For
Liine Lemur
Other
Stand-Alone Utility / Application
Copy Protection
Customized Per Customer
My KVR - Groups, Versions, & More
9 KVR members have added enChord to 5 My KVR groups 10 times.
Not In Your MY KVR Groups
(or group limitation prevents versioning)
4 0 Favorites
3 0 I Want This
1 0 I Own This
+2 in private groups

enChord is a truly innovative application that lets you design harmonically perfect chords and chord progressions using all of the most popular music scales in the world with the assistance of one-touch chord progression analysis and scale modulation analysis, for you to either compose music, perform music (using the included innovative PadBoard and TileBoard MIDI controllers), or BOTH. enChord's fully working prototype was developed by Avantgarde Sound using Liine's Lemur framework with the purpose of aiding composers, songwriters and performers with their ultimate task in a totally new, improved and faster way.

enChord is currently being ported to other major touch platforms, like iPad (standalone version), Android, Windows 8, etc. Plans to make enChord a standalone hardware instrument are being discussed. Further development and porting fully depends on the support of the community and the industry.

Current customers get enChordv1.0 in .jzml format, which they can load to either Lemur on iPad or JazzMutant Lemur legacy hardware via the Lemur editor (running on Windows or Mac)

enChord is readily available for purchase (early supporters will have an easy path (real juicy discount) to upgrade to the iPad standalone version, which is well advanced and will be released as v2 with new features)

The basic premise here is to embed music knowledge for creative emancipation, and freedom of musical expression:

Who says your instrument has to permanently be a static 88 key layout of immutable notes in the chromatic scale that is going to take you decades to truly master? Who says it has to be that? What is the authority over what you or I are "allowed" to consider "harmonically OK", or "harmonically rational", or "playable"?

Why do we have to spend years and years on the chore of "manually" memorizing an infinite amount of intervals and note relationships, chord progressions and music modulations when it might not necessarily be our intention to become session instrumentalists (i.e., a studio pianist)? While that is plausible for the interested, for the rest of us: why not just let the theory become alive and organic and let it unveil itself to us in all its splendor? Theory should not have to be memorized: theory (a bunch of words trying to rationalize and explain what already exists) is really a mere utensil that must be put to immediate use.

So, why not create a machine do all the calculations and the memorizing for us, and just let it assist us on our ultimate goal, the goal that actually matters: expressing ourselves in what is known as the universal human language: music. After all, if music is indeed the universal language, it must not only be universally understood, but also... universally spoken. enChord will embed in you a wealth of musical language for you to use in your musical message.

Life embedded this notion in me: there are no right answers, but only right questions.

enChord is here to pose a couple of questions to a very old system. I do believe enChord's questions are right at this point of the 21st century. enChord, the harmony modular super algorithm, a 21st century MIDI control super instrument, shall embed theoretic knowledge in you as you use it and give you true freedom to deliver your message to mankind through music.

True creative power to you.

*For the love of the machine