Ethno Instrument by MOTU is a Virtual Instrument Audio Plugin. It functions as a VST Plugin, an Audio Units Plugin, an RTAS Plugin and an AAX Plugin. 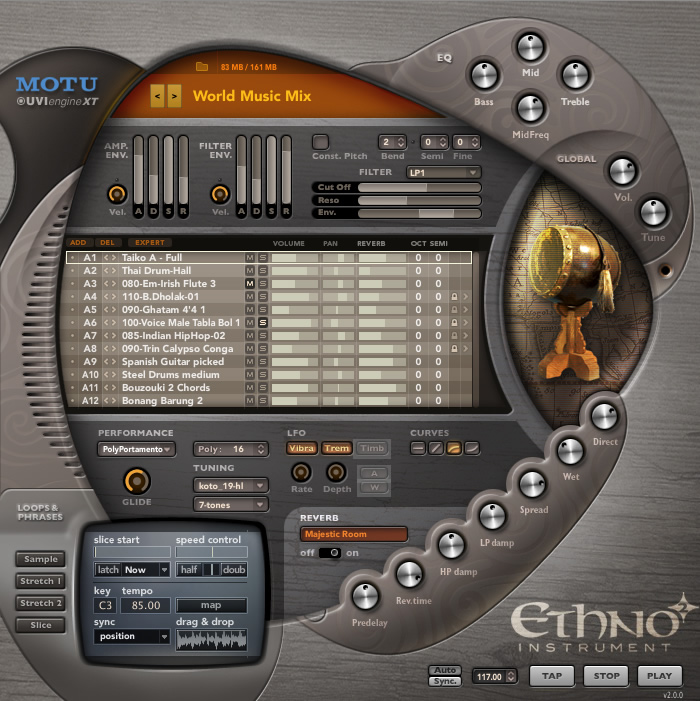 With 4GB of expressive ethnic instrument sounds combined with another 4GB of authentic world music loops and phrases, Ethno Instrument includes all of the exotic textures needed to take recordings to the four corners of the globe. Ethno's multi-column preset browser clearly organizes both instruments and loops by regions of the world, including Africa, Asia, Australia, Celtic, Eastern Europe, India, Middle East, Mediterranean, West Indies, Occidental and others. Instrument sounds may also be browsed by instrument categories, including Woodwind, Stringed, Bell/Metal/Gong, Key, Voice, Percussion and others. When the user loads a sound, a map displays the area of the world that the instrument comes from. If the user then clicks the map, a picture of the instrument appears so that the user can see what it looks like.

Musicians who specialize in each instrument were recorded in world-class studios with pristine audio fidelity and careful attention to detail. For example, many of the included instruments do not conform to Western tonality, so two different Ethno presets are provided: one preset with original, unmodified tuning and a second preset with each note tuned to conform to a Western 12-tone chromatic scale. Users can then play the instrument in its truly authentic form or easily incorporate it into music with conventional Western tonality.

Loops and Phrases
Ethno Instrument's 4GB of stylistically authentic loops and phrases include percussive rhythms, vocal utterances, solo and ensemble voices, single-instrument chord progressions, multi-instrument rhythm sections, ornamental flourishes (such as harp glissandos), and much more. Rhythmic loops always play in tempo with each other, wherever possible, and a "Sync to Host" button allows loops to play in tempo with the time line of plug-in host applications. State-of-the-art time stretching technology ensures sound quality, even at extremely slow or fast tempos. Many additional looping controls are provided, such as Sample Start adjust, Double/Half Tempo and Latch mode for starting and stopping loops with a single keystroke.

Highly rhythmic and percussive loops are stored as sliced loops, similar to REX2 files. With a single click on the "Map" button, loop slices can be automatically mapped to MIDI notes as single hits or beats. Users can then trigger (and record) the individual beats from a MIDI keyboard, drum pad or other MIDI controller to completely rearrange (or otherwise manipulate) the beats any way they wish.

Drag and Drop
To import a loop into the host for further editing, processing and manipulation directly in the host, users can simply drag and drop the loop from the Ethno Instrument window into a host audio track. Sliced loops can be dragged into a MIDI track as MIDI data, where all of the MIDI sequencing capabilities of the host application, such as randomization and groove quantize, can be brought to bear on the MIDI notes that trigger each slice.

Sound sculpting and convolution reverb
The sound of all loops and phrases can be independently adjusted with a variety of intuitive sound-shaping tools, including an amplitude envelope, multimode filter, LFO, two-shelf EQ, pitch controls, and MIDI velocity response curves. The built-in convolution reverb allows users to place their sounds in authentic acoustic spaces, from natural settings like caves and forests to spacious concert halls and soaring cathedrals.

At its price, Ethno is an excellent buy. I installed Ethno Instrument version 1.0.0 a week ago. I could not direct Ethno to find its library on an external drive on the first install, but performing a second install allowed ethno to find its previously installed components (*.dat and *.ufs files) and update them in a fashion which I could later alter to direct Ethno to the proper external drive holding its library. The iLok install went smoothly for version 1.0.0. Once working, the sounds Ethno produced were simply superb. Unfortunately, version 1.0.0 had a playback problem on my machine (eMachine 6811 laptop 2400+ Athlon 64 with 1.25MB RAM) when running in FL Studio 7 and 8. A sound would start and, perhaps, play for a measure, then cut the instrument off. The instrument would have to be reinstalled in the host for the sounds to play again. I later discovered version 1.0.1, an unreleased beta, at MOTU’s site. Installing the iLok update for version 1.0.1 took some practice, however, after a few attempts I got it right. The install of version 1.0.1 was straight forward and I was able to edit the *.dat and *.ufs files to find the library on an external disk in my system. I’m glad to announce that version 1.0.1 fixes the ‘cutoff problem’ on my machine. However, it is a really CPU hog in FL Studio 7 and 8: eating up to 75% with one instance running two tracks of didge sounds, one track of flute, and one of percussion! (The same result obtains for four instances running one track each.)

In past compositions I have used ethic samples in wav form extensively. To get things right required lots of wav file editing, re-pitching, and stretching in Live and Acid. Ethno goes a long way to eliminate the necessity of doing this.

Most of the ethnic styles I’m familiar with are covered and there were one or two surprises for me in the Middle Eastern instruments. I have to say, though, that for someone with a large ethnic sample set; Ethno will seem somewhat limited in breath and depth for a 'universal world/ethnic instrument'. My particular (depth) complaint here is the lack of a more extensive didgeridoo sound set. While what Ethno has is good, it needs a lot more rhythms and drones to be 'universal'.

More urgently, perhaps, Ethno needs more voice styles. Notably missing are Chinese and Japanese voices, various throat singing styles like the Inuit and Tuvan, Tibetan monk and nun chanting, Maori chants, and Polynesian singing. Also, Polynesian and Hawaiian instruments need to be covered. I assume these omissions will be addressed in future releases. (I dread to think how large the library will grow with such inclusions!)

My overall impression of Ethno is that it is an excellent addition to any computer musician’s collection of software instruments, especially where they don’t have an extensive library of ethnic sounds. Ethno sounds like the instruments in the various areas represented. Ethno offers ambient synth sounds, which is more than I'd have expected in an ethnic oriented instrument. The documentation covers the feature set adequately. The presets are all pretty useful. I've had no need for customer support. For about $300US, its a good buy. (There's a specialty gamelan instrument in the market for $500US, which I'll be interested in comparing soon.) Version 1.0.1 seems quite stable, although it needs to be optimized for CPU utilization.Read more