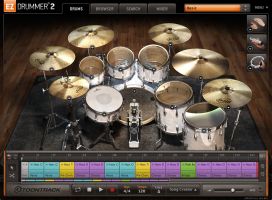 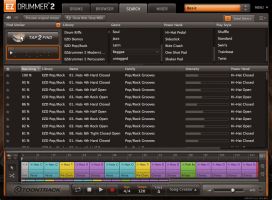 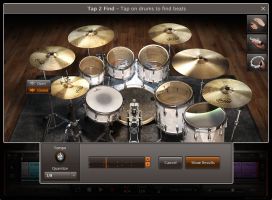 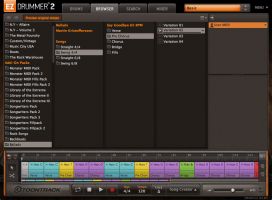 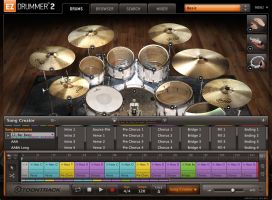 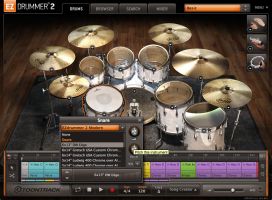 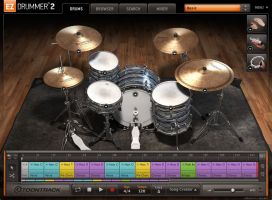 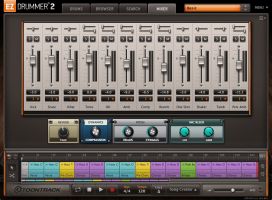 EZdrummer 2 by Toontrack Music is a Virtual Instrument Audio Plugin for macOS and Windows. It functions as a VST Plugin, an Audio Units Plugin, an RTAS Plugin and an AAX Plugin. It supports ReWire.
Product
Version
2.2.3
Product
Version
2.2.3
Tags
Tags:Drum KitsDrumsezDrummer 2LoopsToontrack MusicUniversal 2 Binary
Instrument
Formats
ReWire
Synth Application
Copy Protection
Serial Number
My KVR - Groups, Versions, & More
304 KVR members have added EZdrummer 2 to 19 My KVR groups 373 times.
Not In Your MY KVR Groups
(or group limitation prevents versioning)
180 0 I Own This Top 100
122 +1 Favorites
34 0 My Actual Studio Top 100
17 0 I Want This
6 0 My Perfect Studio
+14 in private groups

EZdrummer 2 is a drum production tool optimized for quick and easy songwriting. With its breadth of sounds and songwriting features, you'll be able to write entire drum tracks for your songs without ever leaving the program.

Welcome to arguably the most streamlined and intuitive drum production tool on the market. Meet your new drummer.

The Features
EZdrummer 2 includes some of the most powerful songwriting features on the market. Go from an initial rhythmic idea to laying out a complete, customized drum track – without ever leaving the program.

The Drums & Percussion
Five (5) complete kits with additional instrument choices, divided over two separate sound libraries – the Modern and Vintage setup. The percussion library includes a selection of the most common instruments and one-shots in modern songwriting.

The Studio
All drums were recorded at London's British Grove Studios, using a blend of some of the most sought-after vintage consoles, outboard effects and state of the art recording technology.

The Room
The main recording room at the British Grove Studios is large, ambient and perfectly crafted for drum production.

The Engineer
Chuck Ainlay. Having engineered in excess of 200 albums, worked with some of the world's biggest recording artists and been involved in numerous gold or multi-platinum releases, his track record speaks for itself.

2 0
EZ Drummer has been my main source when it comes to realistic drums. I've been using this since 2008, and I must say that the quality is plain and simply awesome. That's just that simple. It delivers quality each time, every time.

EZ Drummer comes with 2 different kits for a starter, at least when I bought EZ Drummer it comes with a pop / rock kit, and a cocktail kit. The pop kit is a regular 5 drums 4 cymbals configuration, a kit covering the most basics. Comes with several different drums to choose from. Putting a dream kit takes just over a minute, then the fun begins. The sound has a bit too much reverb default though, but that is easily fixed by lowering the room level in the mixer. There's not much to say about the realism in the drums apart from that it really stands out from the majority of drum samplers I've worked with. Of-course sometimes you get the machinegun effect, but these are pretty much limited to expansions that has very few samples per drum.

Straight up simple and good overview of how the drumkit is arranged. No verbose knobs to tweak the individual sounds. You get the drums and can select the ones you need for your upcoming session. The mixer is easy to understand, configuring multi-track setups is pretty cumbersome for beginners, but once you've learned that then there is nothing stopping you from fulfilling your tracks with killer drums.

Cannot say I've used it very much since the plugin is very much self explainatory. There has been a few times I've read the manual though, but that was merely to read up on how to configure the plugin better, but there is really no need for the manual once the installation is completed since the interface explains itself rather nicely.

EZ Drummer comes with a basic collection of presets per installed expansion, they cover both kits and mixer settings which makes them pretty useful. You can load in a kit and then load in a different mixer configuration. Not that I use many presets since it is so easy to configure the kits.

Toontrack has their own online forum where the most support issues can be handled. They've got a good ticket system and are present on different social medias where people can post questions and show off their creativity.

I have to say that this is one plugin I don't regret a single day that I bought. It costed me 1500 SEK (€150~) to get, but the plugin gives back more than money can provide. The expansions are really cheap, so getting new sounds is always a really good deal. The point is that the more you invest the better the plugin gets. So far I've got 6 expansions on their own disks that gives an awful amount of fun considering that they are really awesome recordings of mostly real drums.

I've used this plugin over 1000 days now, and it hasn't crashed a single time. No matter how intensive my projects is EZ Drummers has withstood all the pressure and delivered each and every time.

Looking for a lot of tweakable drums then look some place else. Are you intrested in good real sounding drums then this is for you. I've spent the last 3 years helping underground hiphop artists getting fresh homecooked beats for their music, and the major plugin I've always chosen to use for the most part is EZ Drummer. This is a must have for me. The inprint this use on the computer is pretty much non existant, but the inprint it does on the sound is maximized!Read Review

14 0
The EZDrummer VSTi fits my needs perfectly. It’s my first drum VSTi, except for the ones that come with Cubase SX. Although it doesn’t have all the bells and whistles that some of the more expensive drum VSTi have, it’s easy to use and sounds great right out of the box.

GUI: Very nice! The main screen displays whatever drum set you have loaded. You can audition the individual drums and cymbals by clicking on them, or select different ones by clicking on the individual instrument’s dropdown menu. There’s a mixer icon that you can click on to display an eight track mixer if you want to process the drums separately rather than the default stereo spread. The Velocity control changes the selected playing style from light to heavy and the Humanize button adds a randomize factor. The Groove screen lets you select from a variety of grooves and fills that are appropriate for the selected set.

Sound: After listening to demos of several drum VSTi, I selected EZDrummer, in part because the drums sound most similar to the way I have mixed drums in studios and in live performances. They are somewhat pre-processed, so it’s easy to get a good sound without any additional processing. Many of the other VSTi demos that I listened to, although unprocessed, were poorly recorded, so I don’t think any amount of further processing would be an improvement (you just can’t find decent engineers these days).

Features: EZDrummer has most of the features I need. Being able to drag and drop the grooves and fills sure makes life easy. But there are limitations, such as a lack of some common time signatures like 5/4, 7/4 and 9/8. And even though there are plenty of grooves and fills to select from, you can always think of more that aren’t available. Still, that’s not really a problem because you can modify the ones that come with EZDrummer or you can tap out your own on a midi keyboard.

Docs: The documentation is sparse because the software is so simple.

Presets: There aren’t really any presets, unless you consider the grooves and fills (each one measure in length) to be presets. And there needn’t be any.

Support: Posting to the EZDrummer Forum gets quick responses from their support folks, although they sometimes forget to answer all the questions. But they are enthusiastic about their product.

VFM: The retail price is fair for what the software does.

Stability: I’ve had some problems with the samples appearing to unload prior to exporting to an audio mixdown, but I’ll credit that to Cubase because I haven’t heard of this problem occuring with other VST hosts. Other than that, the samples load quickly, the VSTi uses very little CPU and so far it hasn’t crashed.

For me, EZDrummer was the right choice, although I think others might find it overly simplistic for their needs.Read Review