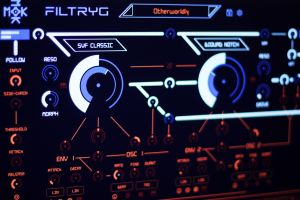 Filtryg is a professional dual filter effect, ready to create new dimensions of rhythmic and timbral expressiveness in your mix. The integrated Envelope Follower, audio range LFOs, and MIDI Keyboard Tracking, all react seamlessly to both your playing and your source audio, making for an inspired filter effect that fully integrates with your performance.

Filtryg features three time-honored filter types: A 12 dB State Variable Filter running in series or parallel, alongside your choice of either 24 dB Ladder, or one of multiple modes of Biquad Filter, each providing their own distinct personality and character. The State Variable Filter is continuously morph-able from Lowpass to Highpass with either Bandpass or Notch in-between, while the Ladder and Biquad feed a Drive control for extra punch and crunch on the output.

Filtryg's visually striking interface offers a knob-based control surface, familiar to synthesists and producers alike. The audio path, modulation routes, and their respective controls are all plainly visible and understandable from the front panel, enabling intuitive and speedy effect programming. Use the wide range LFOs, Envelope Follower, and even MIDI Keyboard Tracking to create wild modulations, or simply automate any Filtryg parameter directly from your plugin host.