Login / Register
My KVR0Updates
00 items | $0.00 CHECKOUT New
Plug-in Developer?
Search
Who are we in the KVR community in 2020?VOTE NOW
Haunted Groundby

Haunted Ground by Zero-G is Soundware (e.g. samples or presets that load into other products). 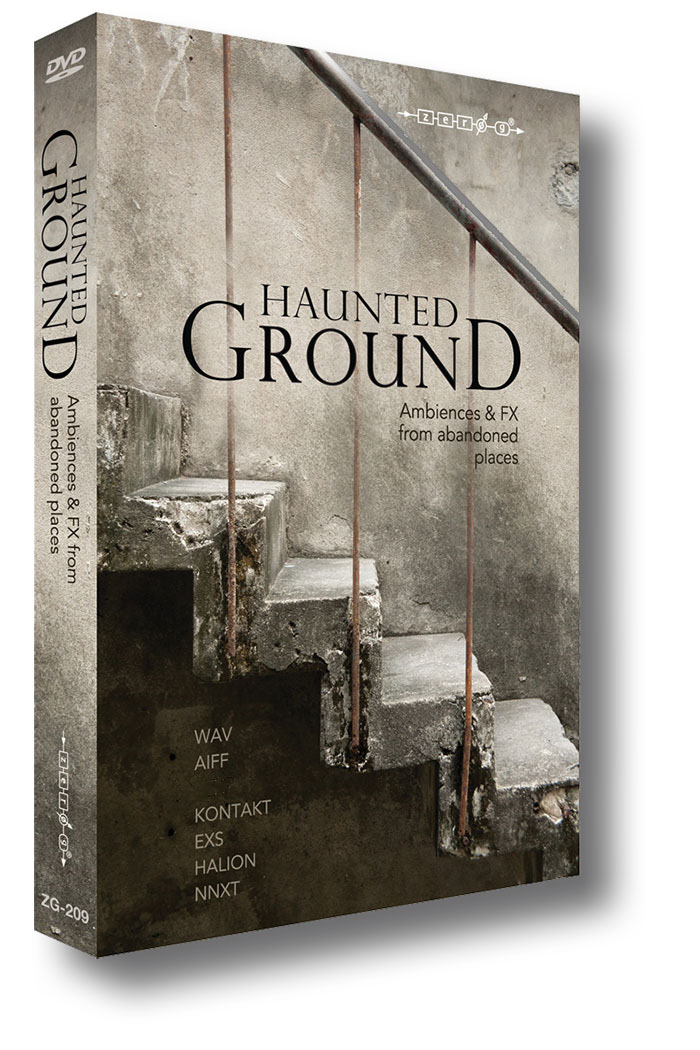 Haunted Ground is an avant-garde sound library inspired by the unique character of abandoned places. The structures that man left to crumble as time ticks away, now brought to life in this collection of samples. Created by sound designer Adam Pietruszko specializing in visual and aural documentation of forsaken buildings, to provide you with the atmosphere and spirit of these forbidden locations. This library took a year to plan, prepare and record. Carefully choosing locations as recording sites and inspiration was taken from countless photographs, schematics and abandoned structure history resources.

The mood of abandoned factories, warehouses and installations has been recreated via means of analog and digital synthesis, along with the sounds captured on-site via field recording, to bring you closer to the exploration, all properly mangled and warped, for that particular eerie feeling.

The sounds of this library give insight into the afterlife of these seemingly dead and quiet buildings. For beneath the rubble, rust and peeling paint, there lies another dimension. The ghosts of workers and inhabitants roam the rooms, halls, corridors and attics, longing for the life that had been taken away from their homes. The machines, furnaces and tools remember their duties, but their shift is over. Delve in the echoes of the past and explore their legacy and hidden nature.

This library is aimed at cinematic and game sound producers, looking to bring a touch of reflection, suspense and nostalgia into their works. Also a contemporary electronic musician will find many inspiring sounds to exploit.

All sounds have been captured in 24-bit, 48kHz audio and are split into 4 categories, for easy construction of your own custom abandoned places sound scenes.

The categories and gear used in the recordings are as follows:

Exploration Echoes – field-recorded and processed sounds taken during exploration to bring (un)real atmosphere to the piece. Some of the sounds were also created using junk and scrap metal in the studio and then warped and mangled with pitch-shifting, modulation effects and reverb.

Forgotten Atmospheres - assorted moody and nostalgic effects including sweeps, textures, hits and other effects to provide background for your track. These were done with all the above-mentioned techniques and gear.

All of the sounds were recorded in 24-bit 48kHz into Apple Logic Pro using a Focusrite PRO 24DSP audio interface. Field recording performed with Sony PCM-M10.

ABOUT THE AUTHOR:
Adam Pietruszko is a sound designer, audio engineer, electronic musician and synthesis teacher. His trademarks are avant-garde electronic atmospheres and effects. He is the creator of KNOBZ.NET, a place for experimental electronica, synthesizers and abandoned places. Adam's background is music for picture, creation of soundbanks for hardware and software synthesizers and all things related to new timbres and sounds.

The library contains over 650 samples in Acidized Wav and AIFF Apple Loop file formats all recorded in stunning 24-bit audio. Kontakt, EXS24, HALion and NN-XT instruments are also included. All the samples in this library are 100% original and royalty-free for your musical use without any additional licensing fees.

For more detailed info on the contents of Haunted Ground, click here for the complete list of included sounds/instruments (PDF)