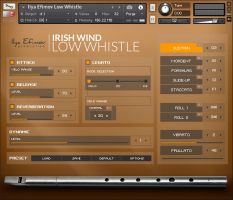 The low whistle, or concert whistle, is a variation of the traditional tin whistle/pennywhistle, distinguished by its lower pitch and larger size. It is increasingly accepted as a feature of Irish traditional music. In both kinds of music the low whistle is often used for the playing of airs and slow melodies due to its haunting sound. However, it is also becoming used more often for the playing of Irish jigs, reels and hornpipes, it being easier to produce some ornametations on the whistle, due to the size of the finger holes. The most common low whistle is the "Low D".