My KVR
Guitar Amp and FX Modeling by Kemper
$1799
at kemper-amps.com
DetailsSwitch Section 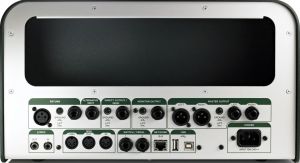 Firmware
6.0
Download
Interfaces
Ethernet USB 2
I/O
¼” Expression Pedal ¼” Headphone ¼” Hi–Z In ¼” Line In ¼” Line Out MIDI In MIDI Out S/PDIF XLR Mic In
Power
PSU (Internal)
My KVR - Groups, Versions, & More
5 KVR members have added Kemper Profiler to 5 My KVR groups 5 times.
Not In Your MY KVR Groups
(or group limitation prevents versioning)
1 0 Favorites
1 0 I Own This
1 0 My Perfect Studio
1 0 I Want This
+1 in private groups

The Kemper Profiler enables a user to capture the soul of any amp inside a lunchbox-sized amplifier.

Kemper uses cutting edge technology to capture the sonic DNA of virtually any guitar amp. The resulting profiles are as living, vivid and dynamic as the original amps.

Imagine you've used some sweet-sounding, well-maintained vintage tube amps in your last studio session: With the Kemper Profiler, there's no need to leave those sounds behind anymore. Simply create your own profiles from these amps and take them with you to use anywhere you like. Variations with alternative amp settings can be created and even the cabinet of a profiled combo amp can be exchanged at any time. Dozens of pro-grade onboard effects and stomp boxes can be used to spice up the profiles.

Included are profiles of many exceptional signature amps. They were created by professional guitarists, engineers and producers in studios all over the world. Right out of the box, you will find classic tones of studio standards as well as profiles of highly sought-after amplifiers, some costing many times the price of the Kemper Profiler.

Kemper says: "We will be working tirelessly to create new profiles for you to download for free from our website. All the profiles we create are extracted from real amplifiers and cabinets, each with a distinct personality of its own. To take the profiles, we employ the exact same techniques an engineer would use to create a great guitar tone in the studio, so you can be sure to receive the most authentic sounds from a digital guitar amp."

Create your own profiles from your own amps:

If you are looking for a particular sound, search the Rig Exchange database on the Kemper website, and download profiles and rigs from fellow users.

So much more than just flicking channels.

Play completely different amp models rather than just switching amp channels on stage! Imagine playing the verse with a sparkling profile of a 1965 black-faced 2x12" combo, done in a premiere studio in Nashville, while burning through the solo with a hot-rodded, British 100Watts monster, driving a 4x12" cab you just profiled last week in your buddy's rehearsal space.

The Amplifier section is the heart of the Kemper Profiler. The sound of the amplifier is based on the profile loaded into the rig. A great selection of intuitive and powerful macro parameters empowers you to perform modifications which are impossible with an traditional hardware amplifier.

Many things become possible from changing the age of the virtual hardware to the response to your play. You gain direct access to tube settings, such as the tube symmetry.
:

The Kemper Profiler is equipped with a traditional bass / mid / treble / presence equalizer similar to what you already know and love from many amp heads. Kemper found that many equalizers used in the tone stack section of more or less famous amplifiers lack of grip and blur your sound in an unnecessary fashion.

That's why they decided to go with their own, original design which is based on a traditional tone stack but is designed to deliver what you expect from a modern pro-grade equalizer:

The Kemper Profiler captures the cabinet as a part of a profile. Thanks to digital alchemy we can distinguish in between the cabinet and the amp head within a profile and therefore enable you to mix and match both in which ever way you like. Imagine you can exchange cabinets freely in between amps, even though those amps were combo amps before. You can even warp cabinets from "tiny as a cigarette box" to "larger than life" with one parameter:

We've also created accurate models of classic retro modulation effects such as a variety of chorus, phaser and flanger pedals. All stomp effects can be edited and copied conveniently between presets. And for your overview and convenience, we use color coded LEDs indicating which type of stomp has been used per slot:

The Kemper Profiler includes an external effects loop which you can patch in anywhere among the virtual stomps boxes. The location and other details can be stored per rig. The monitor outputs also can serve as a pure analog buffer amp for re-amping:

The master effects section features reverb, delay and additional slots for stomp boxes and studio effects to refine your amplifier's tone. The six knobs on the front panel offer convenient access to the most important settings. The reverb section features a dense and lively reverb algorithm which won't mask the original signal. The delay section features several tape and stereo delay algorithms which can be synched to MIDI clock. A special control allows for continuous crossfade between a serial and parallel routing of the delay and reverb. Both delay and reverb feature a full spillover when switching between rigs. Tails are never cut off at any time, even when the upcoming rig features totally different effects:

Thanks to a Hi-Z input optimized for passive guitar pickups, the Kemper Profiler offers a crystal clear signal path. We use only professional-grade analogue components to ensure that your guitar tone remains unchanged.

We include a single-knob smart noise gate on the front panel that is completely transparent. It's faster than any other noise gate we have experienced and doesn't need an adjustment of the release time. Damping a string results in immediate silence:

The Kemper Profiler features two independent main outputs which can be used in multiple ways. The mains feature a balanced studio level connection and a parallel pair or TSRs. The monitor output optionally provides the amplifier's sound without the cabinet. This proves beneficial for musicians with an existing power amp / cabinet on stage.