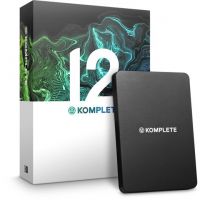 Learn how to use Komplete... in KVR Learn

Average user rating of 4.00 from 3 reviews
Read all reviews Add A Review
Report

Had ultimate for months still feel like i have not even scratched the surface. Nearly the perfect package. You will only be "Komplete" for 5 minutes until they release more that wont be included in komplete until the next yearly release, making komplete owners always get the latest bits months after release (unless your buying a separate license that will need selling on when you update komplete). Could be 10 stars if it wasnt for the greedy marketing techniques.

Native Instruments' Komplete 6 is the juggernaut of the softsynth and production world: if you want to make noise, Komplete has that noise and 20 variations on it. Before I begin the review I want to say one thing: after upgrading my DAW with a 2TB hard drive I went out and bought Komplete 6. Before I upgraded I had around 100-200 VST plug-ins. After installing Komplete I now have, besides the NI VSTs, about 5 or 6. Komplete is just what the name says: complete. If you want it, you've got it, give or take a few hours of programming.

I installed Komplete 6 on a 2TB internal hard drive (my main drive, not an extra). The installation took about a day of popping a disk in, watching TV or playing piano for a bit, coming back, and popping the next disk in. Since I have such a large drive it barely even changed my space diagnostic: the entire library is something like 60-70 GB with both Kontakt and Battery installed. Though that is a lot for just seven programs, since Kontakt is 40+ GB to begin with, it's really not all that much. It's better to install on an external drive in my opinion, but since I had so much free space I decided to just put it on my main drive.

On to the programs in alphabetical order:

Battery 3: Lordy, lordy, I've seen the light! I came into Battery ready to just brush it off and go back to using XLN's excellent Addictive Drums. Then one day I sat down and played with it. Seven hours later I got up, got something to drink, and sat back down to make ONE. MORE. KIT. Battery 3 is possibly my favorite drum program I've ever used. Though Addictive Drums is still my go-to for Hip-Hop and rock, Battery is always there as my backup with its excellent sample library and super-easy GUI.

FM8: Absynth's partner in crime. FM8 is another VERY powerful softsynth that can gently rock you to sleep or rip your freakin' head off. The extremely wide range of sounds makes it good for almost any musical or atmospheric application. Though it works great as a simple plug-and-play synth, its' made specifically for long, evolving sounds. The built in arpeggiator is detailed enough to be able to create very involved sounds with little programming, and the very powerful FM synthesis options make it a nice addition to any studio.

Guitar Rig 4 Pro: The lone effect in the bunch holds its own with powerful modeling and a wealth of killer effects. Emulates a ton of guitar amps. I wish there were more bass amps but the guitar amps sound great with bass and bassy sounds as well. Surprisingly, running subbass through GR4's citrus amp with the right settings creates a very nice overdriven low-end sound. Full of surprises and hundreds of great presets.

Kontakt 4: Deep enough to be its own DAW, Kontakt is the most powerful sampler on the market. The standard library has literally thousands of instruments ranging from acoustic and electric guitars to the most obscure African, Asian, and electronic instruments. Exemplars in my opinion are the Mellotron, The Band Basses, Electronic Toys, and the analog drum machines. Learning to rout midi and audio data is a must.

Massive: Don't really use it, similar to FM8. Sounds great, good presets. Can be very bassy if programmed right. Has a nasty tendency to crash too, probably why I don't use it much. After I get a handle on Reaktor I'm looking to learn to use it better, but at this time its gathering virtual dust.

Reaktor: Powerful modular synthesis VST. I'm still learning how to use Reaktor, but I can already tell it's one of the deeper programs in the bundle. It has nearly endless synthesis capabilities. Much like Max/ MSP it seems to have a steep learning curve. I know musicians who swear by it as the benchmark for modular synthesis.

Overall the value is what really strikes me: for 560 bucks you get 7 great programs, 60+ GB of sample content, and hours upon hours of music making capabilities.

If you read nothing else read this: since I got Komplete 6 I've been writing a new song or beat every day, if not 2 or 3. I recommend you pick up XLN Audio's "Addictive Drums" as well, in my opinion I could make a song every day for the rest of my life using just Komplete and AD. A great package for people just beginning to get into production, writing, or softsynths. A must have.Read Review
Report

There are few software packages that are as much value as Komplete - look at the price of the 11 instruments that make up this package and add up the prices, you get them for less than half price buying them this way.

Probably the biggest downside to this is how long it takes to install them all and their libraries, but when you see and hear the results it's all worthwhile.

The interfaces have obviously had a lot of effort put into them to make them either look like the instrument they are emulating, or have had a great interface designed for non-emulated instruments. My only criticism here is that sometimes not enough thought was put into how much screen real estate will be taken up by these apps.

I can't really think of anything to say in terms of criticizing the sounds - they all sound great, whether you're looking for digital, analog, high quality or lo-fi.

Documentation isn't lacking either - not only do you get a collection of printed manuals, there is plenty of other information in PDF files that are installed with each instrument.

There are presets galore, with a lot of thought having gone into them. Descriptions of the presets are great too - you get some idea of what they will sound like - something that doesn't always happen with other instruments.

Customer support from NI tends to be a little slow. I haven't really had any need for it with Komplete, but my experience is that you have to be patient with them.

Value for money? Hell yeah! These things work out at less than $100 each and you're getting incredibly high quality for that price!

I've had no problems with stability with any of these. If anything, the versions included in Komplete 5 run leaner than demos of previous versions. NI seems to have done a lot to get these things working as well as they can.

Overall I would recommend this package to anyone. I know it's pricey, but if you have the money you really should invest in this.Read Review