LA school esquire limiter by King Oz Records is a Virtual Effect Audio Plugin for Windows. It functions as a VST Plugin. 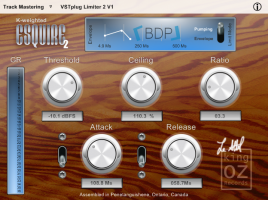 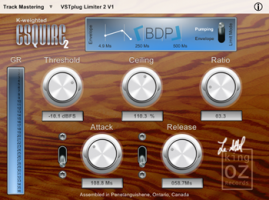 Please comment and rate if you love this product :).

The esquire limiter uses two algorithms to process sound; A standard "envelope" mode as well as a "pumping" mode which allows some very unique effects. Now 32 and 64-bit VST2 compatible.

In pumping mode; at low threshold and ratio tolerances, the esquire reacts much like a peak limiter in that it aggressively reduces volume. This however can be a great strength to create both effect and a more pleasing variety of normalization.

The one really nice touch about the esquire though is that it leaves no color. In fact it smooths the sound out. But it's not an artificial sounding smooth, not clipping or leathery complexity. It's not chalk or grit, it sounds like the smoothness in the air to some degree. And the envelope has no spectral tilt smoothness while it's processing, in fact - the sound stays the same.

A smooth and sweet sound allows this limiter to be used at either the forefront in the master channel or track by track with little dissonance. Do be careful of the pumping mode however due to its intolerance of gain variance.

There's another plus to using this limiter. Due to the fact that it uses a natural logarithm; its implementation of latency in the form both attack and release allows you to add transience to a great extent. In fact, you can potentially add 275 ms to the tail of your vocals and synth lines. The esquire is one the most sought after styles of limiter that have ever been made. But, it's not designed to be a utilitarian limiter to remove clipping to a huge extent. It's instead designed to smooth over sound to make it sound natural. Try the wall by boz for an ideal limiter for hard clipping limiting.

It's also important to note that many limiters have a high pass built in. One may be added so that attack for drums and wide samples does not cause any mild distortion. Planned for version 1.7.

(1.6)
+ Improved the behavior of the pumping limiter by individualizing the db detector type to threshold.
+ Enhanced the levels of pseudo morph ism because it looks neato and keen.

For product suggestions and support try the DSProbotics forum:
http://dsprobotics.com/support/viewtopic.php?f=3&t=16533&p=51766#p51766

LA school esquire limiter is a release of King Oz Records & Bipsounds which is hosted by bigdreamproducer.

VST is a trademark of Steinberg Technologies, https://steinberg.net

Below are a few videos You can watch showing the result of this professional level limiter.