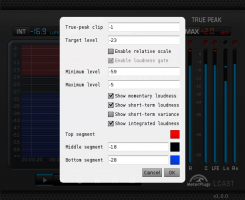 LCAST makes it easy to take loudness and peak measurements. It supports all the major loudness standards and has easy-to-use presets for the most popular ones: ATSC A/85, ITU BS.1770 and EBU R128. Mono, stereo and surround formats are all compatible (surround only available in LCAST Surround).

The history plot displays all standard loudness measurements: momentary, short-term and integrated loudness. In addition to that, LCAST features a custom variance measurement that gives you an idea of how dynamic your audio is. Each measurement can be toggled on and off so that you can focus on what is most important to you.

LCAST's true-peak meters accurately detect inter-sample peaks and warn you of potential clipping. It does this by quadrupling the signal frequency (internally) and interpolating between audio samples. This process catches overloads that other meters miss.

LCAST is fully customizable, from its loudness and peak measurements to its user interface. Settings are available for the target loudness level, true-peak clip level and gating. Presets allow you to quickly switch between different loudness standards such as: ATSC A/85, EBU R128 and ITU BS.1770-2.

LCAST Surround gives you the option of exporting loudness data to a CSV file, which can be opened in a 3rd party app like Microsoft Excel. All loudness and (per-channel) peak measurements can be exported. This gives you the flexibility to create custom reports, perform additional processing and integrate LCAST into your workflow.