Lemon by Acustica Audio is a Virtual Effect Audio Plugin. It functions as an Audio Units Plugin, a VST 3 Plugin and an AAX Plugin. 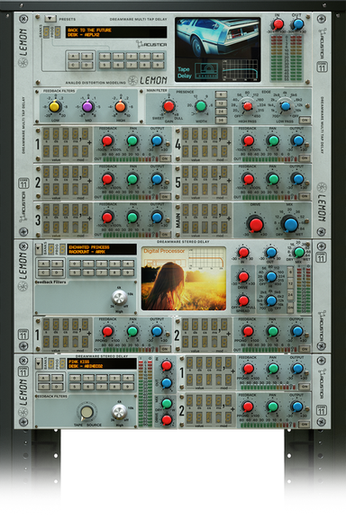 Lemon Multi-tap is a time delay effect processor equipped with five independent delay modules. It emulates the nature, the behavior and the sound of many various hardware units, like analogue delays and tapes, including new symmetrical and asymmetrical saturation technology by Acustica Audio.

Lemon Multi-tap includes 40 different delay and/or tape emulations, divided in four memory banks (A-B-C-D), each one with a great sonic character and excellent performance plus a collection of 100 preset. Lemon Stereo, and Lemon Lite also include 60 presets ready for use in an auxiliary channel or as insert.

About Acqua Effect plug-ins:
An Acqua plug-in is a stand-alone skinned Nebula library, in other words it is a software product developed as a parametrization of one or more Nebula's instances. Parametrization is achieved using the script languages proprietary to Acustica Audio and does not require external tools and compilers.

About Acustica Audio:
Acustica Audio is a company that is active in the field of information technology and audio engineering. The company's goal is to provide the most authentic reproduction of sampled vintage gear and other high-end hardware devices. Over the years it has become well known for audio plug-ins, by manufacturing its own software products and marketing them both in Italy and worldwide. Acustica technology is based on a software engine of DSP (Digital Signal Processing) developed by Acustica Audio that emulates other DSPs, by modelling them through a proprietary sampling technique. Unlike the audio sampler, which is an electronic musical instrument able to capture and reproduce audio samples, Acustica technology can sample and emulate the behavior of an audio processor, by reproducing its harmonic response, harmonic distortion and dynamic response as time and other external variables (like user controls) change.