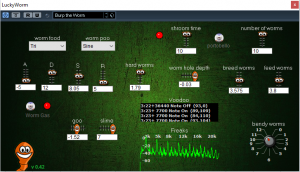 LuckyWorm by BipTunia Synths is a Virtual Instrument Audio Plugin for Windows. It functions as a VST Plugin.
Product
Version
0.45
Tags
TagsFunBipTunia SynthsLuckyWorm
Instrument
Formats
Copy Protection
None
Open Source
Other / Unknown
My KVR - Groups, Versions, & More
10 KVR members have added LuckyWorm to 5 My KVR groups 16 times.
Not In Your MY KVR Groups
(or group limitation prevents versioning)
5 0 Favorites
4 0 I Want This
3 0 My Actual Studio
2 0 I Own This
2 0 My Perfect Studio

LuckyWorm is a non-nonsense, yet robust, mono synth. It's great for heavy bass, forceful leads, crystalline chimes, and more. Has 64 presets.

For an idea of the sound: I was going to call this synth "Emerson, Worms, and Palmer", but thought I'd receive a lawyer letter, or at least hate mail. lol.

The two oscillators are called "worm food" and "worm poo."

"goo" is other filter resonance.

"number of worms" is output volume.

"worm hole depth" takes one oscillator slightly out of tune for depth.

"ASDR" is obviously the envelope.

"worm gas" is an ASDR filter.

"breed worms" is speed of delay.

"feed worms" is feedback of delay.

"bendy worms" is amount of pitch bend on wheel.

Also has a built-in waveform display, and a MIDI signal window. These are fun, but also help understand synthesis and MIDI.

LEGAL: VST is a trademark of Steinberg Media Technologies GmbH, registered in Europe and other countries.

BipTunia Synths has been licensed for VST SDK use by Steinberg. Agreement countersigned by Steinberg on August 23, 2018.

It's a 32-bit VST2 VST synthesizer from BipTunia synths.

Average user rating of 5.00 from 2 reviews
Read all reviews Add A Review
Report

This is a good little VST/i.You can get some good and basic sounds out of it. It is extremely low on the 'ol CPU (not even a tickle shows on my rig) and I think with a bit of tweaking you can create some good stuff. Very stable, ran it solid for 4hours and no crashes. Seriously guys, give it a go and see what you can get out of it.

The look and feel, doesn't take itself uber-seriously, but is solid and useful and fun all the same.

The "about" says it's better than 5 grand of Eurorack gear, and maybe it is. Eurorack does't stay in tune, this is solid as heck, and you can make a song with it playing everything in less time than it takes to plug in all your euroracks, let alone dial in a patch.