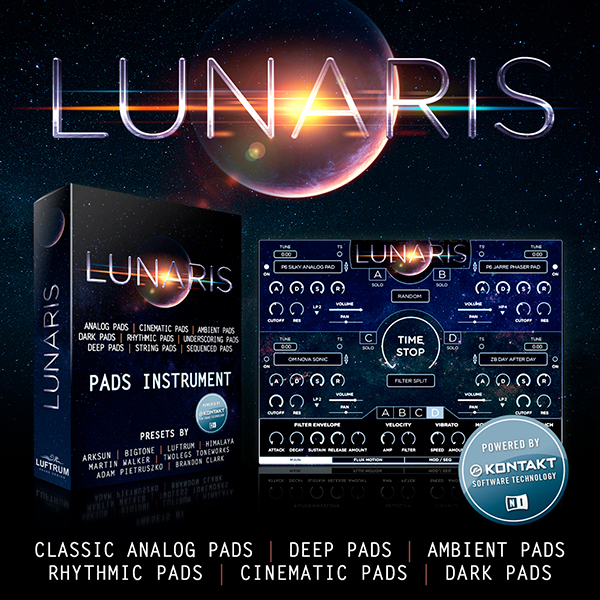 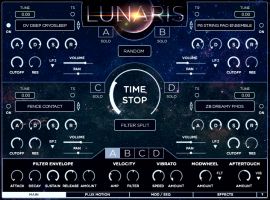 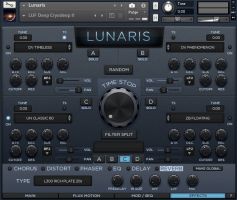 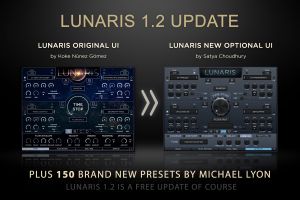 Lunaris is a sample based pad instrument, containing pads only from classic analog pads to lush ambient pads, cinematic pads and any pads in between including 30 original Luftrum pads from the Prophet-6. Lunaris also contains sequenced pads from underscoring elements to more contemporary rhythmic patterns plus a selection of dark, avantgarde and obscure pads. Lunaris is 4.5GB and ships with 400 presets created by sound designers as Arksun, Bigtone, Himalaya, Luftrum, Martin Walker, Adam Pietruszko, Twolegs Toneworks and Brandon Clark.

At the heart of Lunaris are 2700 meticulously hand trimmed samples, collected in over 200 sound sources of multisampled pads, field recordings, synth transients and soundscapes available to mix, sculpt and shape into the perfect pad structure.

Not only is Lunaris a dream pad machine, it is also a full bodied creative tool that can excel at anything from soundscapes to synth leads, as well as drones and organic textures, complementing both the producer, composer and the sound designer.

Lunaris is licensed to and made for the free Kontakt Player so the full version of Kontakt is not required. It will run without limits in the free Kontakt Player or the full version of Kontakt v5.6.8 or later, and can be loaded directly in your DAW as any other plugin. It will also load in Propellerhead Reason 9.5, the latest version which adds VST to Reason. Lunaris is NKS ready and designed for use with Komplete Kontrol and Machine.

Lunaris is updated to v1.2 with ​150​ brand new presets by Michael Lyon bringing the total preset count up to over ​400​ pads. The new presets range from deep lush pads to organic nature pads to light, glittering, 90s inspired fantasy pads with memories to the D-50 era and early digital hardware synths.

The update also brings a new and optional GUI (user interface or skin if you prefer) in an elegant and classic dark synth theme that is easy on the eyes. The new GUI is designed by ​Satya Choudhury and can quickly be activated and switched back again by clicking the logo.

The sounds in this program are phenomenal. I was looking for quality in a Pad or Cinematic Ambience Creation tool, and after dabbling with it for a number of hours, I know I've made the right choice. There are some other powerhouses out there, including Arpology, that basically offer a different set of tools (and Arpology is much more expensive, but that's another story). But nothing as important as getting just the right vibe for your project, and of the other "blending" Pad vsts, this one caught my attention immediately, partly because I used 2 other Luftrom releases in the past.

On the weaker side, the two hiccups I've had since purchasing this are 1) I had an older version of Kontakt in one of my folders, and my DAW was using that version (after migrating my VST folders to 2 different PCs in the last several years), completely unbeknownst to me. [That was totally my fault, but I blame Native Instruments - at least I would do so if I was less sober right now] 2) I have a disappointment in the way the step sequencer section functions. Nevertheless, since I already own Arpology that's sort of beside the point, and probably will get corrected in a version or two.

The sound designers on this collection, per the manual, include Arksun, Bigtone, Himalaya,
Luftrum, Martin Walker, Adam Pietruszko, Twolegs Toneworks, Brandon Clark and Michael
Lyon. I now imagine that these designers are experienced professionals, because I have not purchased a collection I've liked better. You can dial in combinations that really sound authentic, personal, and continuously intriguing.

As with some of the other similar products, this is basically a blending product, comprising 4 layers.

The layers are called A, B, C, and D. Each Layer has its own amplitude envelope, resonance, resonance cutoff etc. They can all be pitched up/down up to 36 semitones. There are 6 delicious filter types. All the layers allow the selection of Pad Sources.

But C & D in particular include other sound sources, which, wonderfully, includes synth transients, field recordings, and synth soundscapes.

I think what I was most blown away by was selecting some of the synth transients to combine with my sound. What a fantastic idea to include such a great collection of them here. I can sample them out and use them elsewhere too, which is really a boon.

You know, having this it really feels like owning a real bank of hardware synths and having 24 hours a day to fool with them, compressed into the blink of an eye.

The 3 added effects for the group of pads in the preset include Random (keeping your env, mod, filters, and FX the same but swapping out random selections for A, B, C, & D. The two others include Time Stop, and Filter Split. Time Stop is fairly obvious, it is like placing a hold on a reverb - which can be incredibly useful if you are a soundtrack designer. Filter Split is a unique effect that intelligently sets up filters between the different patches, and can be selected multiple times until the right combination happens.

As afforementioned, I did experience a bit of vertigo when I wasn't able to understand how the step sequencer functions, to make basic semitone moves. But hey, the goal here is more of an unpredictable, more ambient result, so I'll leave that for my Arpology, Kirnu Cream, and Omnisphere Live Mode.

Basically the remainder of the Library is self explanatory. Each of the Layers have a main tab, flux motion tab, envelope tab, and fx tab. Flux motion works well, comprising filter, volume and pan settings. Per the manual, "clicking the 'generate' button will change the underlying low-freq algorithm behind the mod, applying new subtle motion to the parameters..." - Auto-generated at the press of a button. :) The MOD Sequence tab has two sides: The Sequencer/Modulator side allows sequencing of Pitch, Filter, Volume or Pan (But only 1 at a time). The other side is the LFO side, which includes two LFOs (one of them free-running), each with their own destination and type of waveform. Samples&Hold is one of the choices, which is intriguing. At a button press the LFOs can be sync'd to your DAW tempo.

The FX are noticeably exceptionally high quality, including Chorus, Distorion, Phaser, EQ, Delay, and Reverb. The reverbs are IR-based, with some wonderful presets.

But basically its the quality of included sounds in this Kontakt Library that makes it, they surpass, as a group, anything you will likely ever find in one place. I think the package is easily worth 4 times the price, and although I'm not wealthy by any stretch, I can't see how I could better spend that money.