Mapex Heavy Rock Kit - Multi-Velocity Pack by Drumdrops is Soundware (e.g. samples or presets that load into other products). 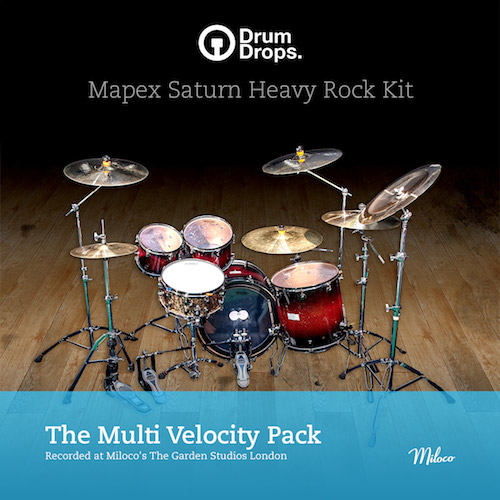 The Mapex Heavy Rock Kit is a monstrous sounding rock kit. The kit sampled belongs to UK rock drummer Jason Bowld and is the kit he has used on all his recordings for the last five years for producers such as Andy Sneap, Romesh Dodangoda, Machine, Ulrich Wilde and Colin Richardson. This kit was also used to record the drum tracks album Heavy Rock Drops. What makes this kit special is it comes with three different Mapex snares and four different crash cymbals all carefully sampled in an incredible sounding live room.

The "Multi-Velocity pack" is our sample pack which is suited for customers who want multiple velocity levels. The pack includes up to sixteen velocities of each articulation. In total it contains 481 drum samples. All of the samples are mixed from a combination of the overhead, room and close mics recorded as 24-bit 44.1 kHz WAV files, meaning they can be loaded into almost any sampler or drum machine. Included are 10 patches for some of the most commonly used software packages including:

The multi-velocity pack now also contains over 500 MIDI loops covering a variety of genres mapped to the default MIDI map.

The Multi-Velocity Pack of the Mapex Heavy Rock Kit is available exclusively from the Drumdrops store costing £ 15.00. Head over here to find out more.