MarsPeaks Reverb Placement by Turn2on is a Virtual Effect Audio Plugin. It functions as a Rack Extension Plugin. 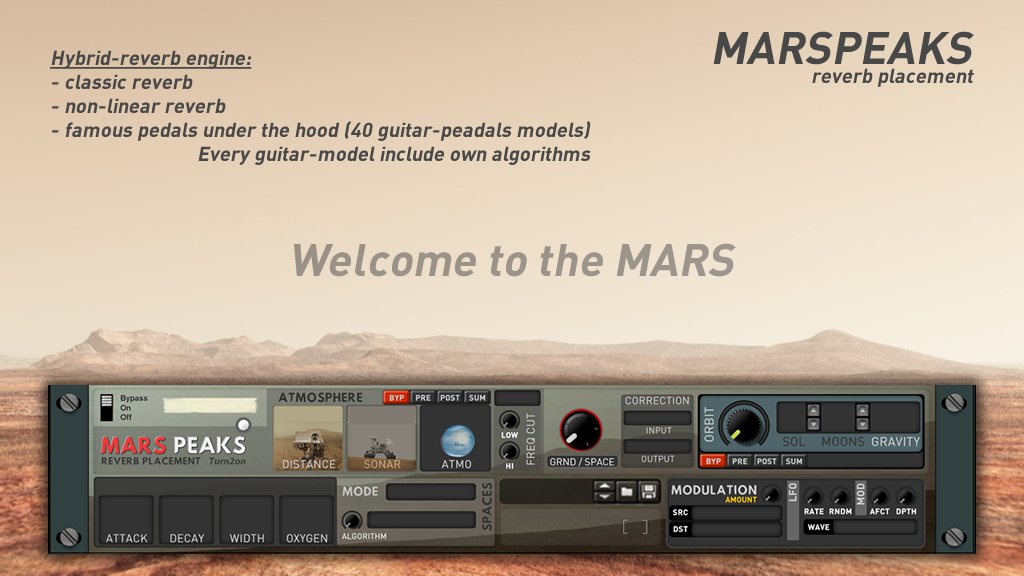 Mankind has always been drawn to the unknown. Conquering Mars has ceased to be a dream and is now a reality. We are already exploring its surface and atmosphere. The geography of Mars is vast and complex, having mountain peaks, craters, and plains, called oceans.

This device allows you to simulate the environment of the planet, taking into account its wind, atmosphere, and surface relief (simulated by the movement of the Rover). We invite you to plunge into the space of a lonely Mars, to feel the scale of an empty planet, and its reflection of sound vibrations in the atmosphere.

The device has several basic modules.

The study of landscape and atmosphere is carried out within the framework of the ATMOSPHERE module.

The Rover Explorer is managed in the ROVER module section.

The study of the orbit and the influence of its moons is carried out by using the ORBITAL module.

The study of the near planetary space of the planet, methods of oxygen saturation of the environment of the planet is carried out in the SPACES module.

The ATMOSPHERE / ROVER / ORBIT modules have the option to be used as either Pre/Post or Sum with the SPACES module.

SPACES has 39 models of real hardware, such as guitar pedals and other studio effects processors. Each model has its own algorithms. We have combined them together, in one section, to give this RE even more spatial manipulating capabilities.

Why do we call it RackExtension as everb device which allows "reverb placement with a hybrid engine"?
Because there are several different ways to create reverbs in this RackExtension. You can perform morphing of different types of reverberation. You can also use CV inputs for RE parameters, use Automata-CV inputs for modulation, or use the built-in LFO with 8 waveforms. Re-patches is supported, so you can create and load your own patches.

We used several algorithms from well-known guitar pedals and processors.

Go through time and space.

Why you left VSTs?by foosnark @ 22:40 in Hardware (Instruments and Effects)