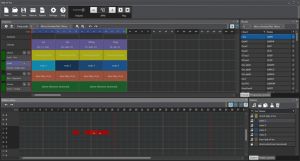 MelodyBuilder by write-a-hit.com is a Standalone Application for Windows. It functions as a Standalone Application.
Product
Version
6.0
System Requirements
Windows Vista or higher
Tags
Tags:Composer ToolChordsHelperMelodyMelodyBuilderMusic ComposingMusic PrototypingWizardwrite-a-hitcom
Other
Stand-Alone Utility / Application
Copy Protection
Other
My KVR - Groups, Versions, & More
5 KVR members have added MelodyBuilder to 5 My KVR groups 6 times.
Not In Your MY KVR Groups
(or group limitation prevents versioning)
2 0 Favorites
1 0 My Actual Studio
+3 in private groups

Usually, a song has an underlying sequence of chords - a chord progression. It may start with A minor, moves to E minor, maybe ends with a C major chord. Finding these progression is mainly limited by your knowledge about what chords exists, how to build them and how they work together, and of course your time to iterate and arrange chords to find the one progression that sounds great.

Even worse for those who don't play an instrument very well. You are stuck with your mouse, a sequencer, some notes on what notes which chord is and long nights of trying. Sometimes it can take forever and still you end up with something that sounds nice but at the same time is not very special.

MelodyBuilder tries to maybe not solve these issues but provide an interface that tackles several issues:

In MelodyBuilder you are not arranging notes, you are arranging chords and combine them with patterns - template that describe how to play any chord. That makes them highly re-usable, because you do not come in contact with notes you can't do many mistakes, and due to the drag & drop interface you can try out chord progressions and melodies much faster:

Why making it complicated when you can focus on the creative part instead?

Average user rating of 2.00 from 1 review
Read all reviews Add A Review

Lets see how long this will last until deleted like the first review posted from someone else.

It is really a pity, the ideas that goes into the program, the easiness of handling, could be a really nice program. The three windows for songstructure, pattern editing and chord progressions are great. Simple midi-export, a lot of not explained (maybe only planned ???) things under the hoot (for example VST support), but:

NO SUPPORT AT ALL.

NO CHANCE TO REBUILD DEFAULT STATUS OF PROGRAM.

Even for bugs that stop the program from being useable at all. I just lost some important windows (patterns, preset patterns), no chance to restore. No view menue, even uninstalling, cleaning registry and reinstall wont help.

Have asked two questions via contact formular a week ago, before buying: no anwer.

Then cause of the really nice intentions decided to buy.the same.

And so my conclusion: NO it is not "been a pleasure doing business with you!" like they said in the only mail I ever get with the download link (of course automatically generated.....)

Thanks, your review saved me some money to spend on something that works and is of some use.