Now That's What I Call 80's Drums
by Drumdrops

Now That's What I Call 80's Drums by Drumdrops is Soundware (e.g. samples or presets that load into other products). 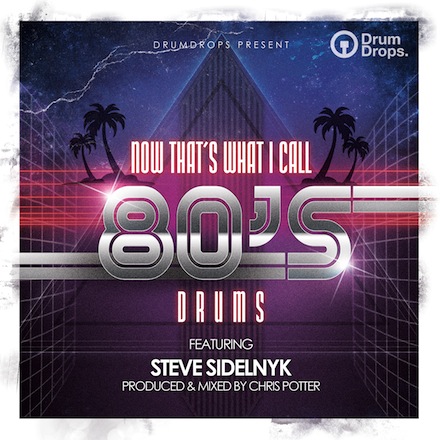 Drumdrops brings you 'Now That's What I call 80's Drums'. Featuring twenty 80s Pop drum tracks ranging from 71BPM to 179BPM, this is a wide-ranging collection of 1980s drum tracks. It takes influences from a variety of 1980s acts, with nods towards drum grooves synonymous with the styles of George Michael, De La Soul, Soul 2 Soul, Happy Mondays, Michael Jackson and Depeche Mode, to name a few.

Performing the tracks is drummer Steve Sidelnyk (Madonna, Annie Lennox, Massive Attack), who began his career in the 1980s. The album was recorded by Brit Award-winning producer/engineer Chris Potter (The Verve, U2). Recording took place at Miloco's Sofa Sound studios in West London, which is owned by producer Hugh Padgham (The Police, Genesis, Phil Collins).

Recorded on an SSL E-Series console and a rack of vintage Neve 1081s and 1064s, they were able to record an authentic 80s Pop Drum sound. All of the drum tracks were recorded to 2" 24-track tape on a Studer A800 tape machine, while the live room added a suitably controlled drum sound.

A DW Collector Series drum kit was used for this recording. The snare drums used were a Ludwig Black Beauty, Ludwig Coliseum and a DW Craviotto. The kit was fitted with Evans drum heads, and nineteen microphones were used to record it, ensuring what we at Drumdrops believe is the best sound possible - have a listen for yourself.

'Now That's What I Call 80s Drums' is available to purchase as single tracks, or you can earn 20% by buying the full album versions. Drumdrops offers the album as drum multi-tracks, mixes, drum stems and drum loops. All of the multi-tracks come with session templates including Pro Tools, Cubase, Ableton Live, Reaper and Studio One. An OMF file is also provided should you need to export the 24-bit 44.1 WAVs into any other DAW. A beat tempo map is included to help sync up the drum machines.

The stem and mix packs come with the full mix of drums, as well as separate drum stems of each individual drum component. These stems are ideal for those who want the ready mixed versions of the track and will help build your track at speed.

The drum loops packs contain on average 6 different 4-bar loops taken from the track and are provided as separate mixes of the individual drum parts, as well as the full mix. Available formatted as WAVs, Apple Loops and Rex2 files, they can be dropped into any software.

You can view full information, preview tracks and purchase at www.drumdrops.com/recording/now-that-s-what-i-call-80-s-drums.

For KVR Readers you can get an additional 20% off the album by using the voucher code KVR80s at checkout.