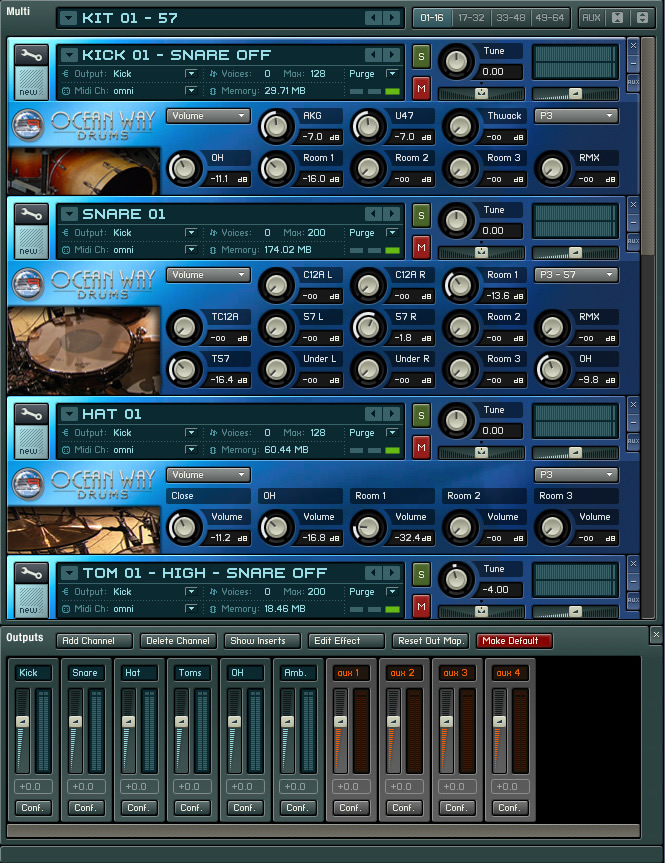 This product is "Powered By" Kontakt Player. The OS and Format icons listed below should be accurate for the latest version of Kontakt Player.
Plug-in, App & Soundware Format(s)
Operating System Availability
Miscellaneous Information

Sides' partners in the project are well known engineer/producer and label executive Steven Miller, and Dave Kerzner, CEO of Sonic Reality. The OWD library incorporates legendary studio acoustics and expert engineering with the highly expressive MIDI-controlled I-Map programming in sample formats such as Native Instruments Kontakt 2, all in one collection.

Sides and Miller recorded full drum kits with the finest kick drums, snares, toms, hi hats and cymbals, utilizing a unique multi-microphone recording technique that captures the sound of each instrument with optimum sonic impact and spatial depth. An enormous variety of sounds are instantly available via preset mixes made by these engineers. Additionally, a virtually unlimited sonic palate is available by experimenting with the various stereo sub mixes, control of the pitch, tone and effect processing.

The sampling sessions of Ocean Way Drums utilized a one-of-a-kind custom console built by the studio's original designer Bill Putman. This console in Ocean Way's Studio B delivers "astonishing clarity" with a slew rate exceeding 200 volts per microsecond running on 28 volt rails, and is considered to be the fastest console on the planet. The historic Studio B has hosted sessions with Frank Sinatra, Ray Charles, Green Day, Paul McCartney, Eric Clapton and Radiohead, among countless other ground-breaking artists. It is the home of one of the best sounding live rooms and some of the most sought after vintage gear in the world. Also employed in the sampling session were highly customized classic outboard gear by Neve, API, UREI, and Fairchild along with rare hand-selected vintage tube microphones and special drum kits that have been recorded by top artists on albums at Ocean Way over the years.

Sonic Reality's I-MAP is a proprietary MIDI note mapping/drum kit layout scheme that facilitates improved live performance of drum kits via MIDI keyboard input. I-MAP places drums in their most flexible and intuitive positions, allowing each of the fingers on both hands independent and coordinated control over the loaded kit. With very little practice, it is possible to lay down complete drum tracks in a single take that have an entirely realistic sound and rhythm.

Additionally, special maps have also been made for control with high-end drum pads such as the Roland V-Drums. Many of the performance articulations from I-Map were designed to be triggered with maximum dynamics and alternate randomization for incredible realism and expression when played from top of the line drum pad controllers. Finally, access to the individual mic channel samples is also available for direct drum replacement in DAWs such as ProTools, Nuendo, Logic and more.

Ocean Way Drums is touted as a complete solution for creating the highest quality drum tracks for all styles of music.

I tried not to give this all tens but as I run through the ratings, I find:

User Interface: I understand what's going on right away. I feel like I'm in my comfort zone - like recording and mixing a real drum set but on steroids, with more powerful tools than I've had before. When I first used OWD I wasn't too familiar with the Kontakt Player interface but it still made sense. I started using this, Drum Masters, and Infinite Player about the same time. So it was also a great introduction to the Kontakt "style"

Sound: These kits sound so good, they give all of the other virtual drum products I use more than a run for their money. When I think "best sound" out of all of them OWD comes to mind first. I use Drum Masters (also from Sonic Reality so they're pitting their own drum sounds against one another very nicely), EZDrummer, Battery 3, Addictive Drums, GURU, and others so I have a good set to compare. OWD kills in sound quality.

Features: OWD has a full set of features, more than enough to get great drum sounds with minimal effort. The multiple sounds (Dry, Medium, Ambient) are easy to dial in and tweak. The Kontakt Player has a great feature set and this is well-designed within the player. It is easy to have a professional-level multi-out drum set. With the added bonus that it was engineered by some incredibly talented big names at one of the premier studios in the world.

Documentation: I watched the videos on the DVD that came with OWD while I was installing it, and there are videos available on the http://www.oceanwaydrums.net/ site. The manual is very good too, and can be downloaded before you purchase the product. This is useful for people trying the free kit available at http://www.downloadablesoundz.com/freesoundz2.php

Presets: The Dry, Medium, and Ambient presets are great on their own. The sound of these drums is so top-quality that you can just load a preset but then the tweaking is amazing too. Lots of flexibility but built on really great presets.

Customer Support: Sonic Reality has never let me down with support. I've purchased many products and sounds through them and their support is always prompt and helpful. They've even helped with products that they are merely a vendor for (IK Multimedia, for example) because they are power users of the products they sell whether they create them or not.

Value For Money: I think the downloadable (DL/Expandable) series are amazing value for the money and I never would have expected them at that price point. The Silver is what I have and is still an incredible value. I believe that all of the series are well-priced to be within reach of many people and the different offerings are very flexible. I don't need the high sample rates and I'm not forced into buying them due to the availability of a version that's perfect for my needs.

Stability: I haven't had a crash and the kits all load up fine for me so I couldn't strike this down any points either. The chosen platform is a great choice for this reason.

I don't think I'm the only one who can say "if you want great virtual drums, use Ocean Way Drums" - Sonic Reality really did a great job getting a great room, great engineers, and great sounds. There's no doubt in my mind about that.Read more