My KVR
Samples by W. A. Production
$29.9
at waproduction.com
DetailsSwitch Section 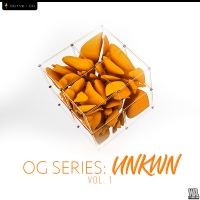 UNKWN has gained major hype over the past year for his insane official remixes for renown artists as well as crazy chart topping singles released on Dimmak, Sony Music, Trap Nation, Lowly Palace, and more.

Here's what he had to say about his pack:

"Over the course of about a year since my launch i've had the blessed opportunity to release music on major platforms.. with that being said i've gotten ALOT of request to make a sample pack.

After seeing my first two free packs get major traction.. i've decided to put together my first official sample pack.

My OG Series pack can literally be applied to all genres of music.. beginner to experienced producers will find good use for it.

Thanks OCTVE for partnering up to release this one! Cheers" –
- UNKWN.