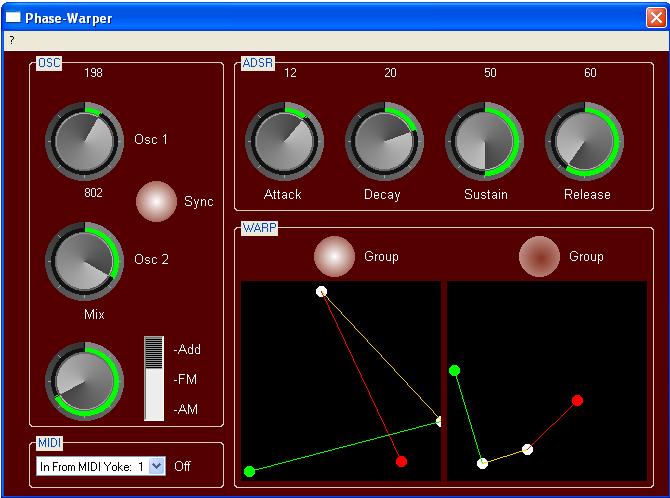 Phase-Warper features a sound production method called 'Vector Phase Synthesis', which distorts the phase of a sine wave by a 2-dimensional vector. As the co-ordinates of the bending point of the vector are varied, a wide range of wave shapes are produced, including 'formants' centred around harmonics of the fundamental frequency, creating human voice-like effects.

You can see from the screenshot that unlike traditional subtractive synths, there are no wave shape selectors or filters here, as the technique doesn't require them.

Phase-Warper can be considered a 'method showcase' product as it introduces a novel synthesis technique via a functioning product, so as to bring it to the attention of other developers who may then choose to evolve and incorporate it into their existing or future products.

Of course Phase-Warper is useable as-is, as a stand-alone, unrestricted real time synth for producing a variety of new sounds and textures, just lacking in 'trimmings' like the ability to save and load patches.