Ping by Mike Norman is a Virtual Instrument Audio Plugin for Windows. It functions as a DirectX Plugin. 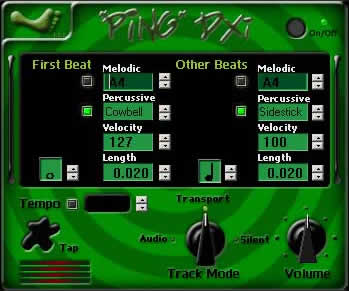 Summary: It's astounding to me that Cakewalk hasn't created an audio metronome for Sonar 3, or even allow the existing metronome to be routed through a DXi/VSTi. I'd bet this is on their list for the next version, but until then, Ping DXi should do the trick. But there are some issues.

Please note, I am harsh towards plugins in my reviews, even when they are low-cost or free. I do this to hopefully to allow people to know what they are getting, and what they aren't. On to the review...

I just bought the new version 3.00 which has a much better looking UI than the one in the KVR photo (go to the author's website to see it).

The UI is pretty clean and self-explanatory, but unfortunately, there are some bugs which make it slightly confusing. These bugs don't interfere with the key operation of the plugin.

The sound is fine for a metronome. Plus, the user can replace the samples with their own.

It's a one-trick pony, but it's better to use this pony than use any of the other work-arounds I've heard for an audio metronome.

The documentation is good but not perfect. There is one glaring omission regarding the count in - you must set Sonar 3's Metronome Count-In to 0 in order to use Ping's count-in feature. If you don't, you will be confused by what actually occurs.

There are no presets. Fortunately, there is a config file which can configure the default behavior of the plugin. Nice.

Unfortunately, customer support was non-existent. I emailed 3 times before purchase to ask some customer-service related questions, and I never received a reply. Despite that, I bought the thing on blind faith. Payment and web-based plugin delivery was flawless. I received the install instructions within 24 hours of purchase.

Stability: No problems, but note the documentation issue listed above, and the UI inconsistencies.

Value for money: It is a very good value for the money at $10. If it cost $30 or higher, I would be hesitant since I predict Sonar will include this functionality in the future.

Bottom line: If you need an audio metronome, buy this. I would buy it again if I had to, and I intend to put it in my default Sonar template which loads with every song. I recommend it despite all issues I listed above.Read more