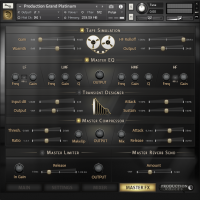 Production Grand 2 is a piano sample library for NI Kontakt 5.6.8 and above, consisting of 8 microphone perspectives and over 120,000 samples of a Yamaha C7 grand piano recorded in a world-class recording studio. The library is 437.5 GB in size*. Based on the same sample set as Production Grand, Production Grand 2 adds many new features such as a comprehensive mixer page that allows the user to mix, pan, solo any of the 8 microphone perspectives and send them to multi-outputs in a DAW for isolated processing the same way an audio engineer and producer would treat a studio piano recording.

The 8 microphone perspectives create a variety tones that just are not possible in single microphone perspective piano sample libraries. From room piano sounds to intimate forward sounding hammer mics and warm inside mics, players have the choice of how to balance their sound the way an audio engineer or producer would in a recording studio. Production Grand 2 was sampled at Phase One Studios in Toronto. The sampling process stays true to the recording process and simulates the flexibility of traditional piano studio recordings.

2. Hammer Microphones: With the hammers recorded, plenty of attack and a more aggressive sound is achieved.

3. & 4. Inside Microphones: This is the sound most people associate with piano recordings. Two sets of microphones were used inside the piano: vintage Neumann U87s and the modern Rode NT2As. This gives the player the ability to get that classic piano sound or the modern wider-range sound or both.

5. Outside Microphones: Just outside the piano we used really expensive Neumann M149 modern tube microphones. This microphone pair has a classy sound and a more balanced tone than the inside and hammer microphones.

6. & 7. Room Microphones: In an attempt to give you modern and classic choices, Coles ribbon microphones and AKG C414s were used on the rooms.

8. Under Piano Microphone: Underneath the middle of the piano a PZM (pressure zone) microphone was used to give a clear centre image to the sound.