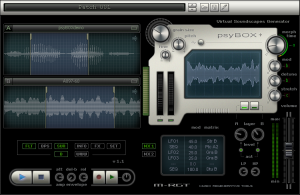 psyBOX by M-RGT is a Virtual Instrument Audio Plugin for Windows. It functions as a VST Plugin.
Product
Version
1.1
Tags
Tags:Soudscape GeneratorM-RGTpsyBOX
Instrument
Formats
Sample Formats
Loads and/or Saves
WAV
Copy Protection
None
My KVR - Groups, Versions, & More
19 KVR members have added psyBOX to 6 My KVR groups 23 times.
Not In Your MY KVR Groups
(or group limitation prevents versioning)
10 0 Favorites
8 0 I Own This
2 0 My Actual Studio
1 0 I Want This
+2 in private groups

psyBOX is a space-atmospheric soundscape generator - made to produce sounds that can be used to create Ambient and Space Music.

This particular tool can be called "pilot-less". When you press the "Start" button you will plunge into the boundless world of the drifting waves woven in amazing sound textures. Depths of the outer space and the touch of the strange worlds, earth and heaven, dark and light sides of the existence – all these are the shades of the sound palette of the "psyBOX". The processes inside the instrument live and develop independently creating all those landscapes.

psyBOX uses samples as a source of spectra, splitting them into multiple grains-micro waves and combining them in clusters. Those clusters are formed randomly and they flow from one into another forming infinite drifting morphing.

3 0
The recently released psyBox was a very pleasant surprise to me for several reasons. First, it was designed by Boris Kovalev, who has a history of designing some excellent synths like the ARP/sequencer Atomic by Algo music (which I already owned) and many other excellent synths. Second, the psyBox footprint is small but is deceivingly packed with a lot of usable features. Third, you actually get two synths for the price of one which I will explain later. Fourth, it filled a much needed functionality for me at a very, very affordable price.

psyBox is a granular generator developed in SynthEdit for Windows only. Its primary purpose is to provide continuously evolving granular soundscapes that can run for as long or as short as the users wants and is perfect for ambient, space music or just about any situation in which a rich atmospheric, granular environment is required. It comes with 70 presets that are quite varied and can be heavily modified with a range of built-in features. The layout is pretty intuitive and you can be up and running in a matter of minutes with either the presets or ability to tweak the sounds ahead of time or on the fly. It comes with two spectrums bank files that influence the granular sound creation. Any modified sounds can be saved for future recall.

psyBox operation centers around samples split between two layers (A & B) that can be played together (with different level, pitch, granular and mod settings) or individually. Each layer consists of granular clusters that morph over time. The main window provides a picture of the waveform being created as it moves over time which was interesting but not essential for operation.

The rate at which the granular clusters morph can be set by the user. Each layer's samples can be detuned and the clusters can be stretched to create more granular variation. Detune and stretch features can also be modified with three built-in LFO's and/or sequencer. Each layer has its own coarse and fine pitch controls that can also be modified with either the LFO's or sequencer or both simultaneously to create some complex rhythmic effects and unique sound generation. I was pretty impressed after playing with psyBox for a week at just how much variation could be obtained.

psyBox is invoked in four different ways. It can be manually started when running as a standalone or can be controlled by midi through CC# or Note# assignment, or by Host initiation. I used Manual for standalone and with Note# in Sonar. psyBox will stop generating by either pressing a manual stop button or through midi note off. It has an envelope to set attack separately for each layer and an overall release decay so when stop is invoked it will continue to play for the duration set by the release value. The visual waveform display does help the user see how long the samples will keep playing after stopping.

In addition to the granular sound creation there is also an FX section consisting of Chorus, Phaser, Delay and Reverb to further affect the output. A built-in ten band EQ with visual display allows for further sound shaping.

psyBox also comes with a built in record feature that allows users to save wav files of favorite sound creations or for playing a recorded wav file along with realtime psyBox sound generation. This alone can create some very complex and dense patterns. Those can also be re-recorded. It is important to note that each time psyBox is played it produces slightly different variations so being able to record is a good way to keep those unique sound generations for future use.

I will not go through every parameter available with psyBox as this review is not meant to be a manual and since a free demo is available for the user to try out for themselves. The actual manual itself is straight forward and explains all of the major aspects of overall operation including the A & B layers, modulation, FX, LFOs, filter control, and Sequencer, etc. No real surprises or head scratching over how something worked.

Now why two synths in one? That is because you get an additional module called psyBox+ that allows the user to input their own samples for granular generation. This was a lot of fun to play with and allowed me to go way beyond the patches provided. All of the psyBox controls are available for making modifications to the user samples. I think that most users like me will find this one of the most useful aspects for original sound creation.

I give psyBox high marks for stability (never crashed), low CPU usage (between 10-18% on my Athlon dual 2.35Mghz running Windows Vista and Sonar 7), robust functionality, ease of use, sound quality and doing exactly what I expected it do and much more. And did I mention that is very affordable?