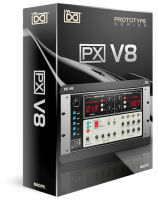 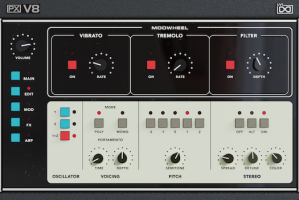 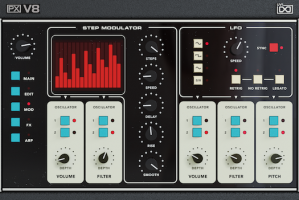 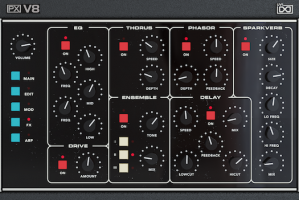 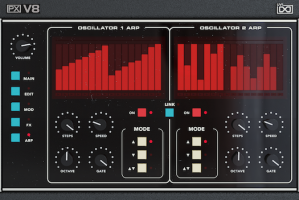 PX V8 by UVI is a Virtual Instrument Audio Plugin and Soundware (samples or presets that load into other products) for macOS and Windows. It includes, and is therefore "powered by", UVI Workstation, which functions as a VST Plugin, an Audio Units Plugin, a VST 3 Plugin and an AAX Plugin.
The OS and Format icons below are for the latest version of UVI Workstation. The version numbers are for PX V8.
Product
Version
1.0.0
Product
Version
1.0.0
Tags
Tags:SynthPresets for FalconPX V8UVIUVI EngineVintage SynthesizerVoyetra Eight
Instrument
Formats
Soundware
For
UVI FalconUVI UVI Workstation
Soundware
Formats
UVI Workstation
Copy Protection
Serial Number
My KVR - Groups, Versions, & More
12 KVR members have added PX V8 to 3 My KVR groups 14 times.
Not In Your MY KVR Groups
(or group limitation prevents versioning)
9 0 I Own This
4 0 Favorites
1 0 My Actual Studio

PX V8 is based on an exceedingly rare American polyphonic analog synthesizer, the Voyetra Eight. Released by Octave-Plateau Electronics in 1982, this unassuming 3-space rackmount synth is a 78 lb. analog powerhouse sporting 8 voice cards and an incredibly deep modulation system.

PX V8 has been a passion project, it took us 2 years to track down a Voyetra Eight, and even then it required significant work to restore to factory condition. Our sound designers spent over 6 months creating sounds with the Voyetra for PX V8; learning the instruments structure, designing patches, exploring possibilities, recording and editing.

PX V8's sampling was made per-key for every patch we designed, both with and without unison mode engaged allowing you to enable genuine hardware unison on any sound in the library. Just like on the Voyetra Eight you can load two layers at once, and with the unison mode engaged you can create truly massive analog sounds without worrying about an 8 voice ceiling.

In the end we recorded over 25,000 samples from the Voyetra - packing PX V8 with a whopping 400 presets made from 176 layers, divided into 10 categories including bass, brass, keyboards, leads, misc, organs, pads, poly, strings and waveforms. Each of the sounds is fully customizable and can be used straight-away or as the starting point for a new sound. Raw waveforms are also available for those who want to create sounds from scratch.

PX V8's aesthetic was adapted to closely mimic design cues from the hardware, giving you the feel of the original instrument as you easily tweak and edit the oscillators, envelopes, multimode filter, LFO and step modulators, dual arpeggiators and a featured effect section including EQ, drive, Thorus, ensemble, Phasor, delay and Sparkverb.

Rare and relatively unknown, the Voyetra Eight is not the simplest synthesizer to master - but the sounds it can create are brilliant, making PX V8 one of our most unique and inspiring libraries yet.

PX V8 offers native 64-bit standalone operation by way of Falcon or the free UVI Workstation, providing comprehensive support for all modern DAWs and simultaneous authorization on up to 3 computers or iLok keys.