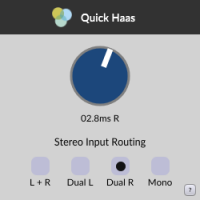 Quick Haas is a free and simple psychoacoustic panning plugin, available as a Windows VST or mac Audio Unit. The 'Haas Effect', also known as the precedence effect, is a psychoacoustic effect where listeners can perceive the special position of an audio signal depending on very small delays between the left and right channels of the audio signal. This allows for a much more realistic panning effect than traditional panning, provided the playback device is in stereo.

This plugin couldn't be simpler to use! If the input is stereo, just select how you want it to be routed into the pan (it is recommended only one channel, or mono, is used if the original source's left/right channels differ), and then adjust the central knob left right so as to make the sound appear to be coming from that direction. Hint: this plugin allows for very fine adjustments of up to a tenth of a millisecond, and often only small adjustments less than 2ms is all that's needed to create a powerful precedence effect.

Great spatial plugin, but it is important to understand that 'Quick Haas' actually has nothing to do with the Haas-Effect itself. Rather, it is concepted by the cognizance of its subsequent psychoacoustic results and tries to emulate the environment which led to these.

But first, let's determine a few misunderstandings from the info delivered by Venn Audio.

"The 'Haas Effect', also known as the precedence effect..."

Both are different things, although they are often equated. The 'Precedence-Effect' or 'Law of the First Wavefront' is base for the 'Haas-Effect'.

", is a psychoacoustic effect where listeners can perceive the spacial position of an audio signal depending on very small delays between the left and right channels of the audio signal."

No. The Haas-Effect has nothing to do with stereophonics in general and the spacial position, at which a listener is perceiving a sound to come from, is also not determined by the delays between left and right channel/ear (at least not covered by the Haas-Effect -> Delay stereophonics belong to a different topic).

The 'Precedence-Effect' or 'Law of the First Wavefront' portrays that if one direct sound and a single reflection (until a certain threshold delay - about 50ms) is emitted, the listener perceives the sound as single event coming from the direction of the first incoming wave.

Now Helmut Haas wrote 1949 in his dissertation "On the influence of a simple echo on the audibility of speech":

"The direct sound that first arrives at the listener determines the direction only. In this case, only one auditory event occurs. The reflection arriving with a propagation delay of Δ t > 2 ms increases the volume of the auditory event, changes the timbre and increases the impression of greater spatial expansion. Even if the following signal (reflection) has a higher level and with a propagation delay within Δ t < 35 ms arrives, the signal that arrives first alone determines the perceived direction of arrival."

Haas found out that a reflection, perceived as single event with the sound, which arrived first (the direct sound), with a delay of more than 2 ms, has the psychoacoustic effect of changing volume, timbre and spatial impression of the whole entired sound.

Exactly this change in sound is 'Quick Haas' trying to recreate as rather to recreate the Haas-Effect or the Precedence Effect per se (which is impossible).

After my tests, 'Quick Haas' is doing that by applying a delay to the opposite stereo channel, which acts as the reflection.

When I adjust for example the dial to the value "L 3.0ms" (Command: To the Left - 3.0ms), the signal of the right channel is delayed by 3 ms, recreating (almost) the same sound colorations (changes in volume, timbre, spatial impression) as perceived by the Haas-Effect.

I tested 'Quick Haas' alongside another delay plugin and the results were very close. But 'Quick Haas' still sounded a bit more spatial which seems like they might have added some further effects to make the sound wider and closer to the "Haas-Sound". But it still boils down to the concept of direct sound on one stereo channel and delayed reflection on the other.

In an abbreviated form: The plugin delays either the right or left channel by 0,01 up to 19 ms, dependent upon whether you drag the dial to the left or right. It could use some additonal effects to the make the sound wider, but due to my tests, it doesn't alter the volume of either channel.

It is not a panning device, although it can be easily but falsely perceived as such.

Note that the input routing whether you choose Stereo, Dual Mono of Left or Right channel, or Mono mixed of L+R, can make a difference to the sound.

I hope I could help you a at least a little with the understanding about the Haas-Effect and this plugin.

It's not just a 'balance' panning, its more a positioning tool; the sound placement is clearly noticeable. By the way some moderation is necessary when using it.