RVRB by Abletunes is a Virtual Effect Audio Plugin. It functions as an Audio Units Plugin and a VST 3 Plugin. 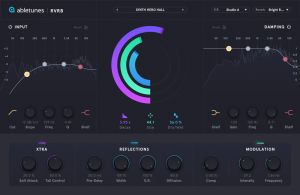 RVRB is a versatile algorithmic reverb plugin designed by producers for producers with the aim not to emulate hardware, but to create modern reverb tool for modern music production.

With its advanced features like Soft Attack, Tail Control, and built-in compressor, RVRB is capable of a wide range of reverb sounds, from classic spaces to unique ambiances.