SpecDrum 2000 by Rhythmic Robot is Soundware (e.g. samples or presets that load into other products). 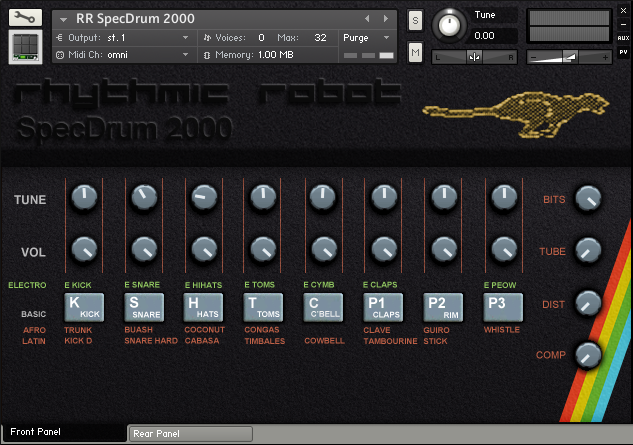 Plug-in, App & Soundware Format(s)
Operating System Availability
Audio Demos
Specdrum Demo
Miscellaneous Information
Important Note
Requires a FULL version of Native Instruments Kontakt version 4.2.3 or higher (all versions of Kontakt 5 supported). Kontakt Player is NOT recommended and will time out after 15 mins or so. PLEASE MAKE SURE YOU HAVE A FULL VERSION OF KONTAKT BEFORE BUYING, AS WE CAN'T GIVE REFUNDS FOR SOFTWARE BOUGHT IN ERROR!
Max. 6 items
Latest Version Changes [view all]
Any OS Version
1.0

Rhythmic Robot's SpecDrum 2000 is a 24-bit sampled Kontakt instrument of the Cheetah SpecDrum and its three add-on sound packs.

The SpecDrum was Cheetah's first foray into drum machines, and took the form of a hardware expansion to the Sinclair ZX Spectrum home computer. Once the SpecDrum expander had been plugged into the Spectrum's expansion port, the user could load up dedicated drum pattern editing software that played the eight onboard samples of the SpecDrum. These were 8-bit samples of real instruments. The add-on sound packs came on cassette, and could load in three further drum kits: Afro, Latin and Electro.

SpecDrum 2000 samples all four kits at 24-bit quality and spreads them across four octaves for instant access. The UI allows access to level, pan and tuning controls for the kit pieces, plus a group of Effects which operate across the whole kit. These comprise Tube saturation, Drive distortion, Bit-reduction (to take those 8 bits down even further!) and buss compression. Subtle velocity control of kit piece volume is built in for "humanising" if needed.

SpecDrum 2000 is available now for and requires Kontakt version 4.2.3. Not compatible with Kontakt Player.