Spectrum Analyzer by Seven Phases is a Virtual Effect Audio Plugin. It functions as a VST Plugin. 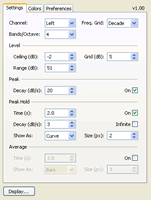 Spectrum Analyzer is a real-time spectrum analysis VST plugin. The idea was to create an old-fashioned tool reminiscent of classic hardware analyzers of the earlier centuries. Unlike most of other analyzers available these days, this plugin is not FFT-based but utilizes a filter-bank algorithms that mould its unique pros and cons.

It's really amazing how such a small plugin can be so efficient. Precision and low CPU consumption makes it perfect.

there are several analyser plugins on the market, most of them with a quite wider feature palette than the seven phases analyser. however, thisone here shows clearly, that the count of features doesn't play a such significant role, if developed wisely.

other than the most analysers in the plugin realm, this plugin doesn't use typical fft algorithms, which traditionally have 2 main drawbacks:
1. the frequency resolution depends on your CPU power, and the bass range, which is clearly the most important range, doesn't give you a detailled resolution to readout, exept, when you use a very high fft resolution and max out your cpu.

2. fft analysers have a so called "window" for the resolution, which determines the speed of the graphical response in amplitude. in other words - you cannot specify attack independent from release times - you alter the overall response.

the seven phases analyser is based on specialized bandpasses rather than on fft, which drastically overcomes the above mentioned problems (in fact i don't really understand, why fft is still being used for creating analysers). the attack is pretty instant, and the release time is adjustable, which makes it possible to accurately set up the analysers amplitude response to the need determined by the level structure of the input signal.

furthermore, the seven phases analyser is pink noise > flat weighted, which visually corresponds way more to the perception of the human ear, as well as this weighting spares a lot of low level headroom. in a white noise > flat weighting, often you have to set the headroom very low in level, to correctly see what is going on in the mid/high-mid/high frequency range, while the low content pretty much blows the window. so pink noise flat, at least for musical approaches like mixing/mastering/sounddesigning is the best choice.

the great thing doesn't stop here, though. you can freely resize the plugin window, you can show/edit the view of average measurement as well as peak measurement, adjust the peak hold length, set up the level range (max and min) as well as the count of bands in 3, 4 or 6 bands per octave (64 bands !!), set up an approximation curve, and set the grid to decades or octaves. furthermore you can edit the colours of mostly ever aspect this analyser offers (which can be stored in profiles or within the plugin preset) and what sometimes comes over like toyish, soon turns out to be godsent in this case.

i've tried _all_ analysers i could get my hands on in VST land, since years. and there are some good ones. but this one made my day since it saw the light of day. recently it was updated to 64-bit, and some changes towards the even better have been done, so it is ready for the future. and here comes the greatest fact of all - it is completely free (at least up to the time i was writing this review).

for someone who is not purely scientific, but needs an analyser that does its job in a real-world mixing/mastering/sounddesigning scenario, this one is imo one of the best, if not even the best choice by the time i'm writing this. i gave it a 9 out of 10 - but only because this thing screams for more bands (128 up to 256 would be a hammer), an easy built-in peak/rms meter as well as for an easy correlation meter. but the absence of those features don't really lower the value of this plugin.

there's quite some unnecessary stuff on the oversaturated plugin market these days - but if there' s very few plugins that i use all the time and that will stay in my projects as if they were host-internal, then this one is one of these rare ones - it' s fixed in my default song of every VST capable host i own, and i wouldn't want to do without this plugin since it was released. imo a must have for everyone who is serious about the stuff he does.

Very customizable and works under Wine on Linux. My favorite, practical analyzer.

This guy should make it payware.

Does Anyone Know This Music?by vurt @ 19:53 in Everything Else (Music related)

Continue this sentence with song lyricsby Aloysius @ 19:45 in Off Topic Classics

Do you ever find Kontakt instruments to be too much trouble?by Jace-BeOS @ 19:45 in Samplers, Sampling & Sample LibrariesArtificial Audio still active?by enduser282 @ 19:36 in Effects1+1=3! PA/Fabfilter/Cableguys/Waves/TDL/PSP/Audiority/Audified/AAS/IK Multimedia/Eventide/iZotopeby Kroket @ 19:34 in Sell & Buy (+Special Offers, Deals & Promos)Does u-he Diva ever go on sale?by AnX @ 19:34 in InstrumentsI've made an error purchasing this mixer? help!.by Juno60 @ 19:34 in Hardware (Instruments and Effects)