BUYING! X Checkout $7.50Buy Now!
SR88 by Rhythmic Robot is Soundware (e.g. samples or presets that load into other products). 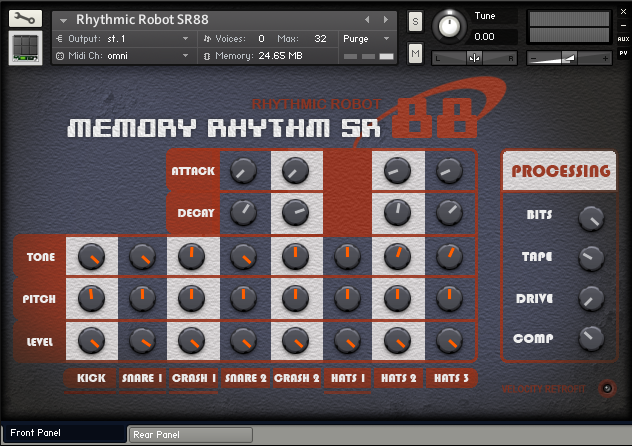 Plug-in, App & Soundware Format(s)
Operating System Availability
Audio Demos
Sr88 Demo 1
Miscellaneous Information
Important Note
Requires a FULL version of Native Instruments Kontakt version 4.2.3 or higher (all versions of Kontakt 5 supported). Kontakt Player is NOT recommended and will time out after 15 mins or so. PLEASE MAKE SURE YOU HAVE A FULL VERSION OF KONTAKT BEFORE BUYING, AS WE CAN'T GIVE REFUNDS FOR SOFTWARE BOUGHT IN ERROR!
Max. 6 items
Latest Version Changes [view all]
Any OS Version
1.0

The Memory Rhythm SR88 is a recreation of the 1980s Sound Master Memory Rhythm SR88 drum machine. All the kit pieces through the entire travel of the hardware unit's Tone control have been sampled, which allows the user to dial in precisely the tonal adjustments that would have been possible on the original machine -- but on a per-kit-piece basis, which was certainly NOT possible on the original machine.

Furthermore, three "hidden" sounds that the hardware unit was only able to produce in programming mode have also been sampled, allowing access to longer versions of the snare, hat and crash cymbal sounds. These "new" sounds have been given full attack and decay envelope adjustment, allowing the user to create brushed cymbal effects, long snare drum decay tails, and so on.

VSTBuzz: Up to 91% off "Indie Kontakt Gems" Week