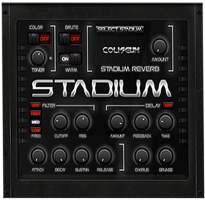 It gives us great pleasure to introduce Stadium for Kontakt 5. This premium production tool arms you with over 300 original sounds followed by a simple, yet powerful set of sound manipulation tools in an easy-to-use graphic user interface. Included in your Stadium arsenal is a large suite of host tempo-synced Rhythmic Loops, Melodic Loops, One-Shot Drums, Transition Effects, Risers and Explosions meticulously captured and processed by the Grammy-winning production team J.U.S.T.I.C.E. League.

Dozens Of Instruments Recorded At Studios All Across The US

Stadium contains original audio captured from some of our favorite instruments in some of our favorite legendary studios, such as Japanese Taikos at Westlake Recording Studios (Hollywood); Premium Acoustic Drums, Stomps and Claps at Treesound Studios (Atlanta); Guitars and Percussion at Clear Track Studios (Tampa Bay) and Analog/Digital Drum Machines & Synths from our personal collection.

We set out to create an instrument that puts you in control of big drums, euphoric melodies & energetic effects - the stuff which makes the music at a real stadium experience, be it a concert or sporting event, magical.

This instrument is compatible with Kontakt 5.4 (full version) and later.