stWIP - Digital Channel by whiteLABEL is a Virtual Instrument Audio Plugin for Windows. It functions as a VST Plugin. 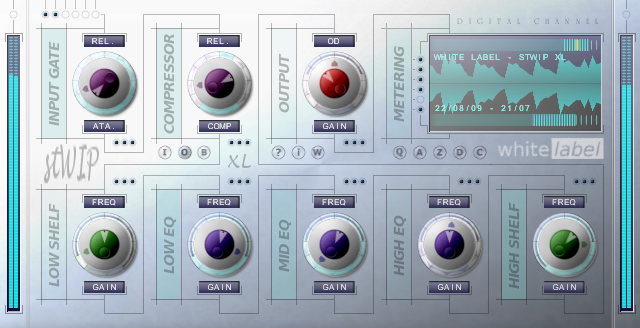 stWIP can be used pretty much anywhere you need compression, gating, distortion, EQ or limiting. Each Filter and EQ band delivers up to 30 decibels of cut or gain and the 10 cross mixed dynamics modes range from light compression to heavy companding. To top it off, a distortion unit can further boost (and / or destroy) your signal and a hard-limiter on the output keeps things under control.

Fully Specified: From a single mono input to a full 5.1 surround mix, stWIP automatically switches to the configuration of your choosing. Whenever a channel input falls silent the channel goes to sleep (reducing CPU use) and whenever a section is un-used it too enters sleep mode so you can use your precious CPU cycles on some other aspect of your project.

Intuitive Control: As well as text-input of major settings, control elements respond to a set of [ + click] commands to quickly and easily set control positions, toggle individual sections, and copy and paste between patches. 5 keyboard layouts are supported for international users - QWERTY, AZERTY, QWERTZ, DVORAK & COLEMAC - once set, stWIP remembers the layout so the control modifier keys are in the same position under the hand regardless of physical keyboard layout.

Clean and Simple: Each of stWIP's 22 main controls is colour coded according to the function it provides - purple for dynamics (gate & compressor), green for filters (high & low shelf), blue for EQ (3 bands, fully parametric) and red for output (distortion & gain). Whenever a control is changed the legend above or below the control shows a real-world value and whenever a section is toggled an easy-on-the-eye indication is given as both the knob's surround and the legend's background illuminate or dim to confirm the current state.

Visual Feedback: As well as control names and values, stWIP's screen displays a waveform of either input or output featuring user-switchable update rates (6 scroll speeds ranging from super-slow to speedy-quick); whenever a filter or EQ setting changes the screen switches to display an approximation of stWIP's frequency response.

Mute Ability: Each and any of stWIP's channels (up to 6) can be individually muted (unless a channel is asleep) and the tall bright VU meters (input & output) give a clear indication of levels - expressed as either linear or non-linear scale (double-clicking the meters changes mode). When the input configuration changes the meters switch to show only the number of channels in use - for example, when using stWIP on a QUAD mix and panning the input to just the front pair of speakers, the VU meters reconfigure themselves to 2-channel mode giving a clearer view of only the channels currently in use.

There are 2 main versions of stWIP - stereo [stWIP (FULL)] and surround [stWIP (XL)]. They only differ in channel-count and price:

In addition, a 3rd version, stWIP (FREE), can be used on mono or stereo tracks but lacks MIDI and automation support. Despite the slight reduction in functionality (and nag-screen) it features the same algorithms and has the same look and feel.

Glitchedtones Retrowave for Serum & Cthulhu
50% Off until 1 Nov 2020