SuperCore v2 by Super Synths is a Virtual Instrument Audio Plugin. It functions as a VST Plugin. 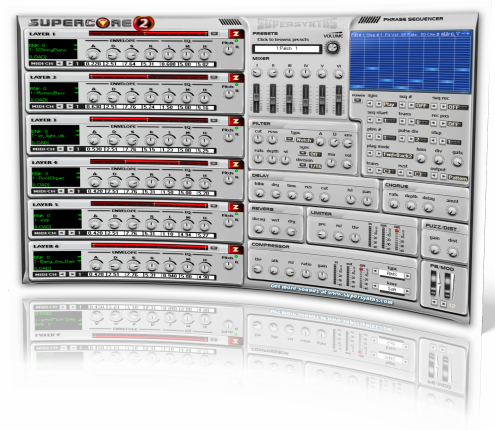 SuperCore v2 is a multi-timbral, multi-layered rompler capable of massive sounds. It is easily programmable and infinitely upgradeable with a nearly endless palette of sounds to use.

The Soundfont loader allows you to load in ANY Soundfont. There are literally THOUSANDS of Soundfonts, both free and paid, out there. Not only can use use your own sounds, but ALL SuperSynths sounds come in Soundfont format, so you can use ANY of our sounds as well.

The ADSR controls allow you to shape the envelope of each sound. More attack gives you a pad. More release lengthens the tail of the sound, etc. The EQ lets you shape the highs, mids and low end of each sound. Add more lows for a nice punchier bass. Take out some of the high end if the sound is too tinny.

The MIDI channel selector allows you to assign any one of 17 possible MIDI channels (1-16 or ALL). You can use this for the built in Phrase Sequencer or in your DAW or Sequencer to have SuperCore v2 control up to 6 MIDI layers in your production. This means you can record as many as six MIDI sequences and then have SuperCore v2 control them, a different sound for each MIDI sequence. Imagine a full orchestral piece or a massive soundscape - anything can be achieved with this! Also, this is PER INSTANCE, so if you have 2 instances of SuperCore v2, then you can control as many as 12 MIDI channels. A third instance and you can control all 16 MIDI channels (with two left over for other stuff). SuperCore v2 has a low CPU footprint, so multiple instances won't drain your memory.

Our Key Mapping System allows you to define any key as another key. You can use this for simple zoning or to re-define where and how your sounds play across the keyboard. You get as many as THREE maps per layer.

The Pitch Shifter lets you raise or lower a sound's pitch by as many as two octaves in either direction. Used with zoning, this allows you to place a sound higher or lower on the keyboard and then alter their pitch to work with your music. For example, if you load in a string soundfont and zone it to the higher octaves on a keyboard, it's where you want it, but the sound may be too high pitched to be useful. Pitch shift it down an octave and now it becomes a good, useful range for your preset. Likewise, you can create harmonic combinations as well. Take three sounds and have them harmonize with each other.

Our Graphical Zone Control System has been CUSTOM system created for SuperCore v2. With it, you can GRAPHICALLY alter the zoning of a sound across the entire keyboard. Included in each layer, this allows you to place your sounds with laser-beam accuracy across all 127 possible keys. Imagine bass sounds in the lower octaves, strings and brass in the middle and lead sounds in the upper octaves. This feature truly allows you to create massive sounding presets. Combine this with the Pitch Shifter, MIDI and Key Mapper and you have endless possibilities.

SuperCore v2 contains a Phrase Sequencer. What is a Phrase Sequencer? It's an advanced Arpeggiator, Trance Gate, Groove creator and Pattern Sequencer. You can graphically place your notes on a massive grid that allows for more than 256 by 256 grid spaces. You can zoom in and out for exact placement. Each note can be assigned a MIDI channel (use this with the MIDI selector in each layer), Velocity and Gate parameter. You can SAVE and LOAD patterns both individually or in banks for future retrieval. Use this to create rhythmic passages alongside your other sounds in SuperCore v2 and in sync with your DAW or Sequencer. Imagine using a drum machine and have SuperCore v2 create the rhythmic pattern to go along with it.

Finally, SuperCore v2 has a complete Preset System. Load ours or create your own. You get 128 presets and can save unlimited programs and banks in all DAWs and sequencers. Every single feature in SuperCore v2 can be saved as a Preset. Consider Presets a SNAPSHOT of the state of SuperCore v2 at the time you save it.

Also, almost all knobs and sliders in SuperCore v2 are LEARNABLE. This means you can use your own MIDI Controllers with almost ALL areas in SuperCore v2 - great for live performance or for easy tweaking.