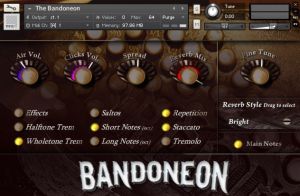 The Bandoneon by Divergent Audio Group is Soundware (samples or presets that load into other products).
Product
Version
1.0
Tags
Tags:BandoneonDivergent Audio GroupKontakt InstrumentThe Bandoneon
Soundware
For
Native Instruments Kontakt
My KVR - Groups, Versions, & More
3 KVR members have added The Bandoneon to 3 My KVR groups 3 times.
Not In Your MY KVR Groups
(or group limitation prevents versioning)
1 0 I Own This
1 0 Favorites
+1 in private groups

About the Developer
Guillermo Guareschi is a film composer from Argentina, he has been scoring films since 1994. His unique style and contemporary techniques makes him a sought after composer in his country. History channel hired him to write the music for the 200th anniversary of Latin America. He has written the music for many movies and prime time series including the successful TV series "Los Simuladores", "Montecristo", "Hermanos y Detectives" the blockbuster feature film "Tiempo de Valientes" (nominated "Cóndor de Plata" for Best Score) Musica en Espera (nominated "Cóndor de Plata" for Best Score) Ciega a Citas and the apocalyptic thriller: Phase 7, now released worldwide.

With orchestral works such as "Esferas" and "Random Walk", written for full symphonic orchestra, Guillermo is recognized as a rising contemporary composer in Argentina. Graduated from Berklee College of Music with honours, he specialized in film scoring and orchestration. He then moved to Los Angeles where he won several scholarships and the prestigious BMI Film Scoring Competition award in 1995. Guillermo is currently working for movies and television and writing music for orchestra. He works from Buenos Aires for local and American projects.

About the Recording
The Bandoneón is a type of concertina popular in Argentina and Uruguay. It plays an essential role in the orquesta típica, the tango orchestra. This particular Bandoneón is a vintage "Premier" with a sweet and expressive sound and was recorded in Buenos Aires, Argentina by the renowned composer Guillermo Guareschi.

Four microphones were used to captured the instrument... One Neumann was in charge of register for the left hand where all the bass notes are generated plus an additional ribbon microphone that handled the very low frequencies with precision. The right hand was captured by a modified SE A5600 II tube microphone and an AKG microphone was set to record the natural high roof ambience of the recording studio. All the microphones were connected to vintage Telefunken pre-amplifiers that delivered the signal directly to the computer without any console or black box in the chain.

The sound of the instrument re-filling with air has also been carefully captured and so has the sound of the buttons being pressed. The recordings were all made at 24 bits 48Khz. Each note was sampled with 3 velocity layers (Piano, Mezzo-Forte, Forte). Lots of interesting articulations were also recorded in detail and each style is playable on it's own or with other articulations.

About the Controls:
Utilising the full power of Kontakt's Scripting Engine we have crafted a fully bespoke user interface to give you complete control over various parameters and articulations.

(Explanations for each control can be found in the user manual)

Right click any control on the front panel interface to assign a MIDI CC control number. If you have an external MIDI controller you can control the parameters in real-time as you are playing. You can also automate the CCs in your sequencer to record and dynamically alter parameters in your compositions.

Products similar to The Bandoneon...