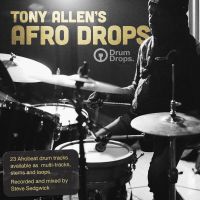 Afro Drops is the first sample pack to be released anywhere from the Afrobeat drummer Tony Allen. Tony is renowned for helping create the Afrobeat genre with Fela Kuti. Afro Drops is a collection of twenty three drum tracks. The rhythms are complex but sound effortless. All of the tracks are about five minutes long and contain plenty of intricate fills and grooves played expertly by Tony. Most of the tracks come with percussion. Ranging in tempo from 82 BPM to 164 there are Afrobeat grooves spanning Tony's 50 year career including a few grooves inspired by tracks he produced with Damon Albarn.

Tony Allen revolutionised the musical landscape of an entire continent influencing the course of Western pop music. Born in Lagos in 1940 Tony never took up traditional African percussion. Listening to the recordings of the great American bebop drummers Art Blakey and Max Roach, he invented a technique that he gradually refined by honing his command of the cymbals, in particular the hi-hat, little used by African drummers – and the tom-toms. When he met up with Fela Kuti in the 1960s they collaborated first in the renowned highlife-jazz band, Koola Lobitos before setting the world on fire with Kuti's Afrobeat.

Recorded on Tony's trusty Pearl Masters Premium Studio kit with a Pearl Masters snare and a Tony Allen custom snare and close mic'd, the kit is the sound of Tony Allen. All the drum tracks change through different musical sections offering a range of dynamics and fills...all ready for you to use as is, or to easily edit into your own arrangement.

Tony Allen's Afrodrops was recorded at Studio 13 in London. A studio where Tony has frequently recorded. It is a Neve VR studio with a good sized live room that provides a great tight drum sound. The drum tracks were recorded and mixed by engineer Stephen Sedgwick who has worked with Tony many times on projects including The Good The Bad The Queen, Rocket Juice and the Moon and Dr Dee.

All twenty three tracks can be purchased individually as multi-tracks (unmixed), stems (mixed), drum loop packs or MP3 practice tracks. The Multi-tracks which are around 2 gig each in size come as full length live multi-tracks and song construction loops. These packs include a tempo map and OMF file to export into other DAW. We also provide templates for Pro Tools, Logic, Cubase, Reason, Reaper, Studio One and Ableton Live and the audio comes as 24-bit WAVs. The Multi-track Song Loops are locked to the beat and cut into song structures such as Intro, groove, groove fills and Outro.

The Stems and mix packs which have all the separate drum mics, percussion and reverb as separate stems come as full length 24-bit WAVs and these also come with a tempo map. The Stem and Mix packs also include the song construction loops (but mixed versions).

The loop packs contain a folder of grooves and a folder of fills. We have included as many useful loops that we can get from each drum track. The loops come formatted as 24-bit WAVs, Apple Loops (24-bit and 16-bit) and Rex 2 Files.

The MP3 Practice Tracks contain a mix of of each drum track with and without percussion and they come with a count in which makes them perfect for jamming to.

Each drum track can be purchased individually or if you buy the album (in any format) you get 20% off the complete price. Individual multi-tracks are £ 6.50, stem packs, £ 4.50 and loops packs £ 3.00. To listen to the tracks head over here.

Check out our interview with {See video at top of page}. and listen to engineer Steve Sedgwick discussing the recording and mixing of these drum tracks here.