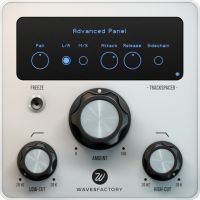 Trackspacer by Wavesfactory is a Virtual Effect Audio Plugin for macOS and Windows. It functions as a VST Plugin, an Audio Units Plugin, a VST 3 Plugin and an AAX Plugin.
Product
Version
2.5.9
System Requirements
Windows: 7 and later.
Product
Version
2.5.9
System Requirements
Mac: 10.9 and later.
Tags
Tags:Dynamic EqualizerTrackspacerWavesfactory
Effect
Formats
Copy Protection
Serial Number
My KVR - Groups, Versions, & More
129 KVR members have added Trackspacer to 16 My KVR groups 150 times.
Not In Your MY KVR Groups
(or group limitation prevents versioning)
84 +5 I Own This
24 0 Favorites
21 0 I Want This
9 0 My Actual Studio
+12 in private groups

Trackspacer is an award-nominated plug-in that creates space in a mix by carving the frequencies that the main track needs into another track in real time. Trackspacer is no ordinary plug-in, it is similar to a sidechain compressor plug-in but much more powerful and transparent. It's considered a secret mixing weapon by many artists, producers, and engineers.

TapeOp said "I would call this a secret-weapon plug-in, but the word is hereby out! TrackSpacer is a ridiculously affordable, easy way to get various elements of your mix to interact in useful and musical ways... Final words: buy it! It works!"

The Trackspacer plug-in features a 32 band EQ that reacts to the incoming sidechain signal. It analyses the spectrum of the sidechain and applies a reversed EQ curve to another track. As if by magic, Trackspacer creates space for the primary track by cutting the exact frequencies on other tracks. No more fighting for space for the vocal in a mix, or any other instrument for that matter. If you have a solo that needs to room to breathe then Trackspacer makes the task easy – complicated automation moves on your mix are a thing of the past.

With the introduction of version 2.0 the Trackspacer plug-in got a host of improvements.

Introducing M/S or L/R modes now you can apply the effect only to the mid-channel, the sides or anything in between. With the attack and release controls, you can set how Trackspacer reacts to the incoming signal and how it processes it, making it smoother or punchier like a regular compressor plug-in.

Does exactly what it's supposed to do and it does it well. Gives you that total transparent sidechaining compression. For example instead of increasing the vocals volume you let the vocals push back other instruments - but only on the common frequency. Or, the favourite: Insert it on a bass track and let the kickdrum control /push back the bass - only where the frequencies are common and only on the kickdrum beats. A good way to clean up low end in a mix.

Best money I've ever spent on a plugin .