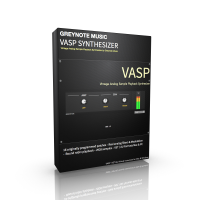 VASP Sound Pack I is a collection of 16 additional instruments from the VASP rompler plugin.

VASP is a collection of real vintage analog synth samples wrapped in a straightforward plugin interface. VASP is available for both Mac and PC. Compatible with any software supporting AU and VST formats such as Logic Pro, Fruityloops, Ableton Live, Maschine etc.

VASP was created with the intention to allow anyone to experience the use of real vintage analog synth tones in their modern setup.

VASP does not feature any digital filter or modulation effects. Instead, the samples feature the original real analog filters and chorus effects recorded straight from a vintage analog synthesizer. All samples are originally programmed and recorded by Greynote Music.

In addition, the samples are fully multi-sampled. This means each note has been sampled individually. To achieve even more realism, a round robin playback engine has been added as well.

VASP comes with a gain, attack and release control and poly/mono/legato playback modes.