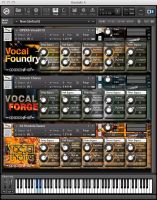 Vocal Factory by Zero-G is Soundware (samples or presets that load into other products).
Product
Version
N/A
Tags
Tags:VocalSamplesVocal FactoryZero-G
Soundware
Formats
ACIDized WAV EXS24 Kontakt NKI Reason NNXT
My KVR - Groups, Versions, & More
3 KVR members have added Vocal Factory to 2 My KVR groups 3 times.
Not In Your MY KVR Groups
(or group limitation prevents versioning)
2 0 I Own This
+1 in private groups

VOCAL FACTORY provides over 4GB and 3700 vocal samples in one library. Vocal Factory is actually three separate libraries in one. Incorporating the critically acclaimed Vocal Forge and Vocal Foundry together with a brand new library, Vocal India. All three libraries are sourced entirely from specially recorded pro vocal performances.

"The target producer here is the one with chart stardom in mind, so if it's big and sing-along that you want then check this out" (iDJ magazine, UK).

"A good vocal hook is the one thing above all others that can potentially transform a track from being merely good to being a memorable hit.. This is a fantastic resource.. Club hooks that are worth their weight in gold." (Music Tech magazine, UK).

Vocal Foundry is made up of pop, dance and urban singers and some very talented folk and downtempo vocalists to produce a more leftfield approach. The straight-up dance anthems haven't been neglected however and there are also pop, folk, downtempo, RnB, hiphop and grime vocals. Again there is a Vocal Toolbox loaded with helpful vocal tools such as gothic stacks, mashed vocals, retro human beatbox loops and opera to name but a few. Vocalists used include Kate Walsh, Michaela Ryall, Monique Lawson, R.Dot.C, Auden Allen, LoudlyJaxx and Paul Mac.

Vocal India is sourced from authentic professional Indian singers. It contains both a classical section and a commercial section in a variety of styles and tempo. It is a fantastic tool for anyone looking for something different to add to their productions.

All the samples have all been pre-cleared and are 100% original and royalty-free for musical use without any additional licensing fees.

For Kontakt users there is the additional benefit of a specially made user interface which includes custom high-end reverb and delay algorithms as well as a high pass filter.

About the VOCAL FORGE and VOCAL FOUNDRY sample libraries - an introduction by the creators, Mike Wilkie and Matthew Corbett:
"We approached the concept of the VOCAL FORGE as music producers. During our own productions there is always a need for vocal elements. Quite often these are little bites and phrases, sometimes spoken, sometimes scratched on vinyl but there are many, many occasions when we've wanted a bit more, something nearly fully structured or something with partial lyrical content. Normally for this we have to get a sessionist in, write the stuff, and incur the time and expense for that luxury.
As a logical step forward we thought it would be a great idea to have all of these elements in one place, all easily adaptable, and all poised to drop in to our productions, a bit MORE than has been accessible to this point!
Like many people we've got vocal sample CDs falling off our shelves but so often, in fact almost always they are comprised of divas screeching 'TAAAAAKKKKE MEEE HIGGGGGHHHHEEEEERR' at the top of their lungs in 12 different keys!
Another element largely ignored is the growth of urban vocals. Urban music has now surpassed Country as the biggest selling music form on the planet but this a fact that isn't mirrored in vocal sample content.
We thought the only way to get these samples is to go to source. We hooked up with Erroll Lawson from Birmingham's Higher Level Music, who looks after a collective of Urban artists based in the city. These artists were the perfect fit for the project. Male and female MCs, sweet R+B singers and a few wild cards to boot.
We also drafted in an old contact from New York for the authentic US Urban flavour.
We knew that many producers out there wouldn't have access to great vocalists or the equipment to record them effectively so we thought writing and recording entire song structures including BVs and adlibs would make an excellent backbone to the project. This way each element of the song could be included, excluded, mixed up, down, extended, reduced, pitched and time-stretched to adapt to any medium. Producers could then include substantial original vocals in their tracks without delving into to the legal quagmire of bootlegging.
There's little point to having a hit record if you have to surrender 99% of your royalties because you didn't get the proper clearance. With the vocal forge users will have a large, adaptable and legally water-tight tool to assist with achieving a more rounded production.
Where possible we tried to steer around the vocal sample cliches and opted for quirky material that would help producers finished tracks to stand out, lateral thinking works!
As well as dry vocals we wanted to include effected, vocoded, re-sampled and bizarre recorded sections. We bought megaphones, cheap nasty karaoke machines, 8 and 12 bit samplers as well as some very special mics and hardware vocoders. For the songs we kept effects to a minimum and the compression very standard so all of the production decisions would be left to the final user.
So ladies and gentlemen, after many months of hard vocalising with a rousing shout of 'no clichés!' each day before work, we are delighted to present to you 'Vocal Forge'! We wish you the very best with your projects and thanks for your interest."

"Following on from Vocal Forge, with our second vocal project Vocal FOUNDRY we decided to focus on material reminiscent of some of the tracks that started the whole sampling and mash-up culture. Tracks like 'Toms Diner' and 'It's A Fine Day' (originally released on vinyl as an accapella). These vocals weren't produced with dance music in mind and stand apart because of a contrast that still sounds like fresh thinking. Rather than gear the whole production towards mainstream dance we worked with more diverse vocalists. We enlisted some very talented Folk and downtempo vocalists from as far afield as Boston in the States to homegrown talent like iTunes best seller and Radio 2 favourite Kate Walsh to produce a more leftfield approach. We haven't neglected the straight up anthems either as we know from the usage of the first vocal forge that people do still like a straight up dance vocal, we just wanted to challenge people this time round and provoke some fresh thinking. We once again added in some Grime MC's to represent that side of dance culture which is becoming ever more popular with the emergence of Bassline. This aspect is a UK based tangent but as always we wanted to produce a product with distinct flavour rather than a generic item that could have come from anywhere. With the toolkit we have once again aimed for more offbeat content - live Spanish quartets, Gothic stacks, mashed vocals and retro loops make up a few of the entries this time around. We've recorded scratching with old decks, scratching with an internationally renowned opera singer and simulated radio samples. We hope the content on Vocal Foundry will inspire the next wave of producers in bedrooms and studios the world over and we look forward to hearing our team of vocalists being woven into countless future productions."