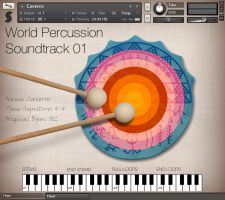 This interactive sample pack takes us on a cultural journey through different cinematic styles, and is a must-have for any soundtrack composer.

The loops and samples are presented in the form of a Kontakt Sampler Instrument, which allows for ultimate flexibility and control over the final sound. There are 37 grooves in total, each containing separate instrument loops and ending variations.

The mixer interface allows for complete control over all the loop stems, and at the simple flick of a switch you can sync the loops to your DAW's tempo. Flick another switch and take advantage of the Input Quantize feature, which allows you to quantize the start of the loop to the beat, as well as sync subsequent loop start points to the initial loops current position. For example, after a note is played on the keyboard, Kontakt's engine will wait until the next beat until the audio begins to play. If no note is released, when a new loop is triggered it will begin playing from the same position as the original loop…so if you hold c3 down for 2 bars and bring d3 in on the 2nd bar, d3 will begin playing the loop 2 bars in.

All the loops and samples provided have been meticulously recorded in a completely dry environment, allowing you to take advantage of the convolution reverb included with instrument, and adjust to suit your mix.

Check out the product page here and a more detailed description of the technical features here.