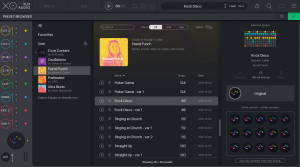 XOpak Ultra Bionic by XLN Audio is a Virtual Instrument Audio Plugin and a Standalone Application and Soundware (samples or presets that load into other products) for macOS and Windows. It functions as a VST Plugin, an Audio Units Plugin, an AAX Plugin and a Standalone Application.
Product
Version
1.1
System Requirements
Windows 7, 8, 10 (64-bit only)

Internet connection (during installation only)

What does an XOpak do?

XOpaks are editable beat & sample expansions for XO.
They contain curated beats & samples that you build your sound upon by using XO and your samples & grooves.

Take your sound into new dimensions of noise with experimental Techno genius Peder Mannerfelt and his well-loved collection of modular synth glitchery. From breakbeat electro to hardcore rave.

One of the shining lights of the IDM world Peder Mannerfelt gives you exclusive access to his incredible collection of music making machines. He tweaked, coaxed, and sampled the hell out of them to create a sonic palette of artful noises. The XOpak consists of individual samples organized by Mannerfelt into 118 ticking, crackling mini masterpieces for you to incorporate into your sound.

Mannerfelt used his substantial private collection, amassed over years of experimentation and messing around with vintage modular synthesizers, patch cables, and effect pedals. There are clicks and clacks from long-lost 8-bit SynthStations, great booming bass sounds from bespoke 90s synthesizers, Peder's go-to snare hit from a Korg PS 3200. Kicks made from the sound of a recorded car door and run through a dizzying array of effects - it's like scrap metal music with all the little pops, glitches, and fizzles you'll need to link it all together into a beat.

Our favorites are the sounds that Mannerfelt made with his late 60s EMS SYNTHI modular synth. This thing has to be seen to be believed - and after having been used by Mannerfelt on Russian raves in massive abandoned factories over the years, the soot, dust, and sweat it has been marinated in has only added to its unpredictable, wonderful character. Expertly manipulated by the man himself, the SYNTHI and Mannerfelt's other machines provide some seriously unique ingredients for you to use in your beat-making.

Experimental sound creator and musician Peder Mannefelt has been at the cutting edge of experimental dance music for well over a decade. Known around the world for pushing boundaries with his live sets, crowds from Boiler Room, Rinse FM, to the Berghain have been taken to new sonic dimensions as the Swedish techno wizard creates otherworldly sounds from his collection of wired-up boxes.

Alongside releases in his own name, Mannerfelt has put out music as part of an abstract electronic duo Roll The Dice with Malcom Pardon and under his own alias the Subliminal Kid and has also contributed to the scene as a producer, notably on Fever Ray's debut album and 2017's Plunge. He runs his own label, Peder Mannerfelt Production.

XO is a beat-making plugin that makes sample browsing a creative part of the production process. The plugin allows you to organize and seamlessly explore your drum samples in a new and exciting way.