Yamaha Hybrid Kit - All Samples Pack by Drumdrops is Soundware (e.g. samples or presets that load into other products). 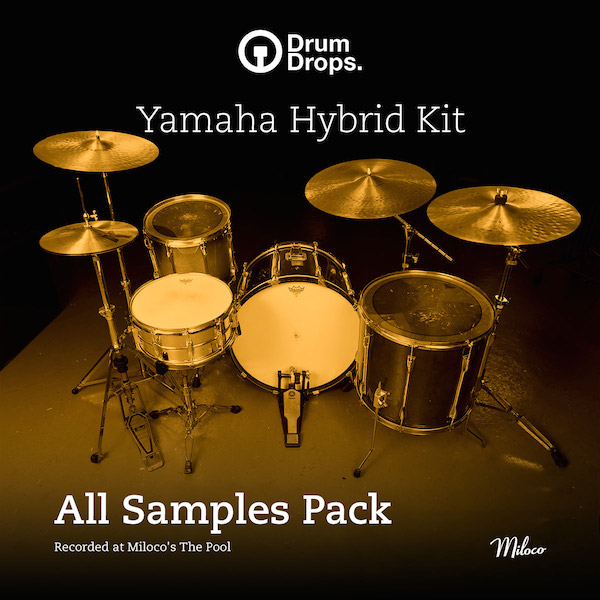 The Yamaha Hybrid Kit is a great all round multi-sampled kit. The kit was recently given away as a free kit in a Computer Music Magazine Recording Special. For anyone who did not get the magazine you can now purchase the kit for a cut down price as a taster of Drumdrops Products. The kit is owned by producer Ben Hillier (Depeche Mode, Nadine Shah, Graham Coxon) and resides in Miloco's Pool Studio in London. The kit has been used by loads of artists in the studio. The drums used to make up this kit have come from a combination of Yamaha kits and together provide a great sounding kit. The kit works well at different tuning pitches, but its big size and its Ludwig 402 snare makes it suitable for deeper rock orientated tracks or ballads or even pop tracks.

The kit comprises a large 24" bass drum, a wonderfully deep 18" floor tom and a 14" rack tom. The snare is a Ludwig 402 14" x 6.5". The cymbals used were a Zildjian Dark 13" Hi-Hats, a Zildjian Constantinople 22" Medium Ride and two Zildjian Crashes - an 18" Constantinople Medium Light Crash and a huge 20" Zildjian Oriental Crash Of Doom. The kit has a black finish.

The kit was recorded by our resident Drumdrops engineer Ben Thackeray. The drummer was Adam Falkner, a busy UK session drummer and musical director. Recent highlights include touring and recording with Dido, Babyshambles, Amy Macdonald, and One Eskimo.

The Multi-Velocity and Single Hits packs contain 10 different patches allowing you to easily load up the samples. These packs use stereo mixed samples taken from a mix of the close microphone, overhead and room microphone. The samples come as 24-bit WAVs although we also include 16-bit versions in the Single Hits Pack. The Multi-Velocity pack contains 400 samples and the Single Hits pack contains 92 samples. The Multi-velocity pack also includes over 500 MIDI Loops covering a variety of genres. The patches included in these packs are for:

As a bonus we also Include a large number of the samples from the Kontakt 5 pack (separate close overhead and room mic samples) These are provided with up to 16 velocities of each articulation and 3 round robins and total 2529 24-bit WAV samples. Customers can build their own patches for their favourite samplers.

The All Samples Pack of the Yamaha Hybrid Kit is available exclusively from the Drumdrops store. Head over here to find out more.