-technical difficulties, please stand by, we'll be right back-

Sorry, there was a weird delay while dictating the notes for this post.
It should be gogogogogone now. Oh crap, wait a sec...

Ok, here we go, this should work now.
You've probably been waiting for this since you saw it in a video from this year's Superbooth.
There was a bit of a delay (pun intended or not, you decide), but now it's finally here.
Today we want to share with you the first preview build (just a fancy new term for a public beta) of MFM2.5, the next update for our beloved feedback machine. 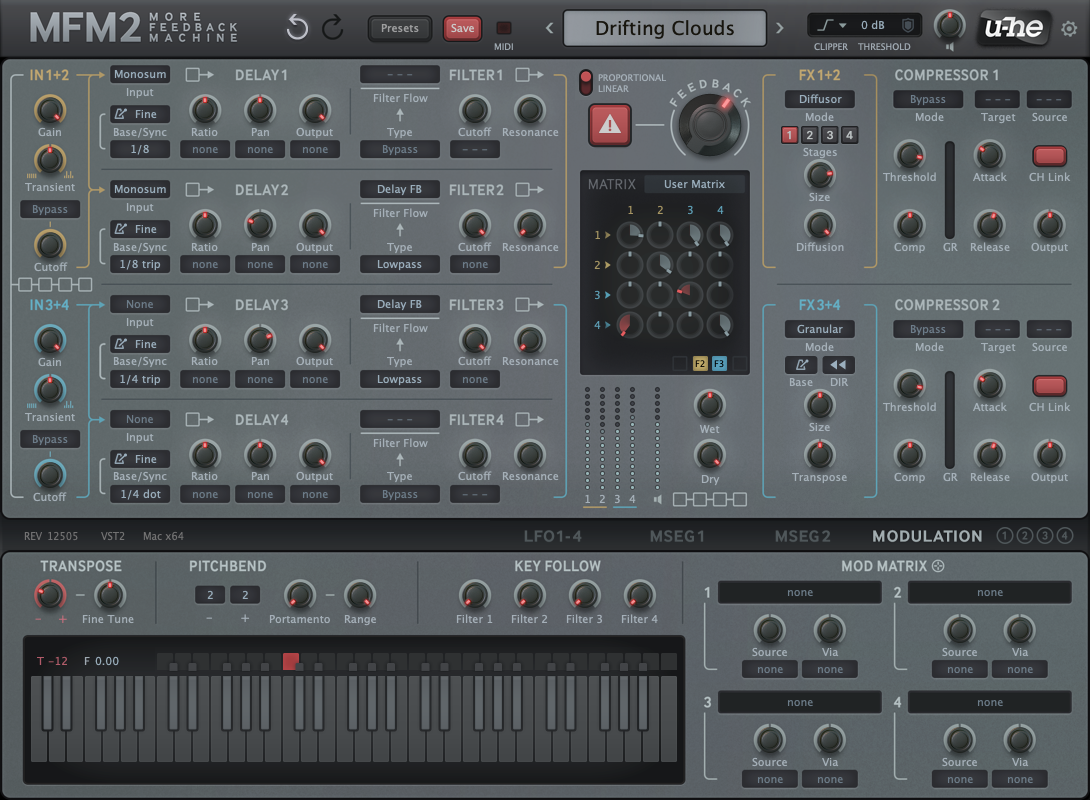 , which hopefully makes it a lot easier to get started without getting lost.

Some other highlights include:

* a new input section, with input gain, a filter, useful for band splitting, and a transient balance parameter
* a new output clipper to protect your ear and gear from overly ambitious feedback adventures
* a new Granular effect
* a new Diffusor effect

We've literally never been so excited to hear your feedback. (I know, I know, can't help it)

So without further delays, grab the preview and make some noise oise ise se:

About presets: The factory library is still work in progress, there are no new presets included yet.
If you want to get a first glimpse of what's possible with the new features, you can download a few example presets here: MFM2.5 beta presets
A few important remarks:

The price for MFM2 will stay at 79,-€ during the beta period, but will be raised to 99,-€ once the update is officially released. We hope for a release early next year.
The update from previous versions of MFM2 will, of course, be free for all existing customers.

As always, it's a beta, so back up your files first and use at your own risk.

And you might ask yourself where is that large automobile what's that CLAP option in the installer?
Good question, glad you asked. It's a new open-source plug-in format we are co-developing with Bitwig and some other collaborators. It's still very much work in progress right now. We hope to have a working beta version available in the coming months. Stay tuned and follow the discussion here: viewtopic.php?f=31&t=574861

We added a "set as default" button for the Ctrl A/B feature on the MIDI table page.
When used, it will set the currently selected set of controllers as the default values saved in the plugin preferences.
This hopefully helps to reduce the confusion regarding the values set on the MIDI table vs the preferences.

A complete factory library reorganization is still going on.
Windows and Linux users, please delete the factory library folder before running the update, to avoid a bit of a mess.
On Mac the installer takes care of that, so no action needed there.
Presets are not tagged yet, and some tags might still change.

The delay line output range has been adjusted from 0 to 200 to 0 to 100.
If old projects were automating this parameter, the automation envelope needs to be adjusted.
Changelog, covering the most important changes since the last release 2.2.1 (revision 3898 Win / 3899 Mac):

It would be great is Bitwig could license UHE the way Ableton licenses Cytomic and AAS.
Top

perpetual3 wrote: ↑Thu Dec 16, 2021 4:15 am It would be great is Bitwig could license UHE the way Ableton licenses Cytomic and AAS.

A safety net, an opportunity and something possibly a lot better in many ways than the status quo. Even if it never picks up, it will still be useful for us.

Also, what's not to like about an open standard which does not require a vetting process, a law degree or learning a new language to get started?
u-he.com | Facebook | Tweets
Top

It's a plug-in format, just like VST or AU or AAX.
It's still under development, you can't use it anywhere just yet.
u-he
Top

This is the clap specification/repository, right?

... first easy test in LogicX: works nice!
... first try in StudioOne 5: crashes the DAW! One time only try to open MFM 2.5->crash, second time GUI was visible but DAW crashed again ... are you interessted in both crash-logs?
Top

A safety net, an opportunity and something possibly a lot better in many ways than the status quo. Even if it never picks up, it will still be useful for us.

Also, what's not to like about an open standard which does not require a vetting process, a law degree or learning a new language to get started?

That sounds great and much needed! I can see Reaper jumping on that once it's ready. Steiny and Apple...not so much.
Top